One of the greatest Bible mysteries centers around the Nephilim (or giants) mentioned in the Old Testament. There we learn a bit of man’s history you will never be taught in any secular high school class! We first have a mention of the Nephilim in Genesis 6 and how they were produced:

The sons of God saw that the daughters of men were beautiful, and they married any of them they chose. (Gen 6:2)

The Nephilim were on the earth in those days–and also afterward–when the sons of God went to the daughters of men and had children by them. They were the heroes of old, men of renown. The LORD saw how great man’s wickedness on the earth had become, and that every inclination of the thoughts of his heart was only evil all the time.

Though they are typically understood to be angels, for the sake of clarity the ones mentioned in Gen. 6:4 must be fallen angels who sided with the evil one. We know the devil has angels working with him from Mt. 25:41:

Then he will say to those on his left, “Depart from me, you who are cursed, into the eternal fire prepared for the devil and his angels.”

Hence, it must have been fallen angels who cross bred with female humans which resulted in the giants (or Nephilim) back then! Those resultant offspring were one of the reasons (if not the number one reason) for destroying all human life on the planet via the Great Flood, except those in Noah’s Ark. Those days in man’s early history were very wicked and God destroyed all, but righteous Noah and his family! That means all the Nephilim died during the Flood.

After the flood waters receded only Noah and his family were alive on Earth. The population again began to increase. Then years later in the days of Moses we read of the Nephilim again! When the spies returned from looking over the promised land, they said:

We saw the Nephilim there (the descendants of Anak come from the Nephilim). We seemed like grasshoppers in our own eyes, and we looked the same to them. (Num 13:33) 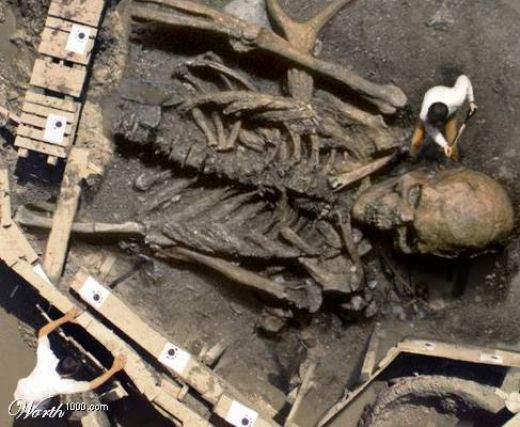 So somehow, the evil co-mingling occurred again as before the Great Flood. The description of the Nephilim in Numbers 13:33 might be a huge exaggeration, but the point is clear. They were very tall, but how tall? We can’t get precise, but Og might give us some idea.

Og was no ordinary human. He was a giant who slept on an iron bed that was more than 13 feet long suggesting his large frame! He was also a Rephaite:

(Only Og king of Bashan was left of the remnant of the Rephaites. His bed was made of iron and was more than thirteen feet long and six feet wide. It is still in Rabbah of the Ammonites.) (Deu 3:11)

The Rephaites, Emites and Anakites were all of the same family:

(The Emites used to live there–a people strong and numerous, and as tall as the Anakites. Like the Anakites, they too were considered Rephaites, but the Moabites called them Emites. (Deu 2:10,11)

Now getting back to Numbers 13:33 we learn that the descendants of Anak come from the Nephilim. That means Og, of the same family (Dt. 2:10,11), was probably like the Nephilim in size!

The Angels That Sinned

Could it be that the fallen angels who cohabited with humans and sinned are the same ones referred to by Peter?

For if God did not spare angels when they sinned, but sent them to hell, putting them into gloomy dungeons to be held for judgment (2 Pet 2:4)

While these things remain a Bible mystery, there is no mystery about man’s need of everlasting life! Do you know the Lord Jesus (1 John 2:3,4)? Prepare for death and eternity. It’s a long time!

This entry was posted in Nephilim and tagged anakites, giants, great flood, nephilim, noah's ark, tall as the anakites. Bookmark the permalink.

One Response to Nephilim