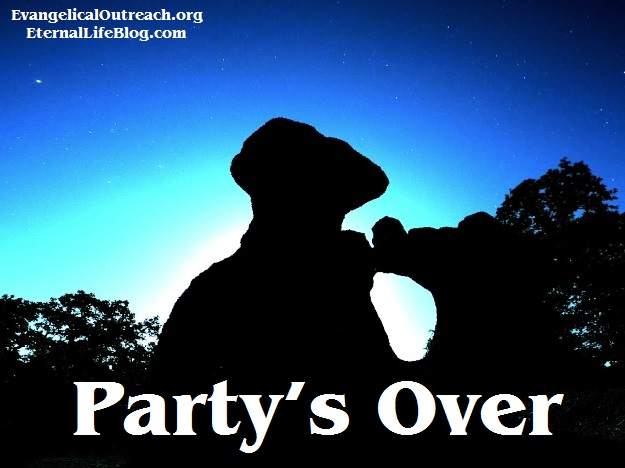 In Luke 16:19-31, the Lord Jesus taught about two actual people who had contrasting lives. They were a sickly unloved beggar named, Lazarus, and an unnamed rich man who feasted daily, dressed like a king and who lived in a house which had a gate by which to enter. Their earthly circumstances drastically changed when they died. For Lazarus, to die was gain as he was carried by God’s angels to Abraham’s side — a place of sweet comfort. The party was just beginning for him.

It was much different, though, for the unrighteous rich man. When he died the party was over! His wealth could not benefit him in the slightest at that point. He no longer did it his way with people waiting on him and catering to his every need. The only thing that mattered at that point was the spiritual and that was where he was sadly lacking! Consequently, as will be the case for all the wicked, he went to eternal fire to be tormented.

Other unrighteous people surely felt the same way upon their death as they left everything behind and suddenly experienced a fiery horror unknown to the people of this world. Just two more examples are Queen Jezebel and King Herod, who lived centuries apart. Each were ruling monarchs in their day with supreme power. If they wanted someone dead, that person would die because they ordered it. Injustice reigned as they lived in all the creature comforts their money could buy, but one day it ended for each. When they died, the party was over as is always the case for people like them. Their power and positions were no longer valid. They left all their money behind. They died in their sins and, like most, entered a living conscious nightmare for the damned. Besides crying out futilely for mercy from the torments of fire, all the lost souls since Adam’s creation could say with those three, the party’s over and now everything has changed.

What a contrast for the ones who have eternal life. Upon their death, the party is just beginning and will never end. What a major difference and it all depends on having a pure heart at the point of death. Such is only possible through Jesus Christ, the Lord. Reader, upon your death, will it be party’s over or party’s just beginning in God’s holy and loving presence in Paradise? Do you know him?

This entry was posted in Death, Party's Over and tagged die is gain, heaven or hell, jezebel, paradise, party's over, rich man and lazarus. Bookmark the permalink.

One Response to Party’s Over