Pope Francis Says His Term Will Be Five Years At Most

Pope Francis has reigned as the sovereign over Vatican City for two years. In the USA, 9 out of 10 Catholics favor him. He says his reign will be brief. 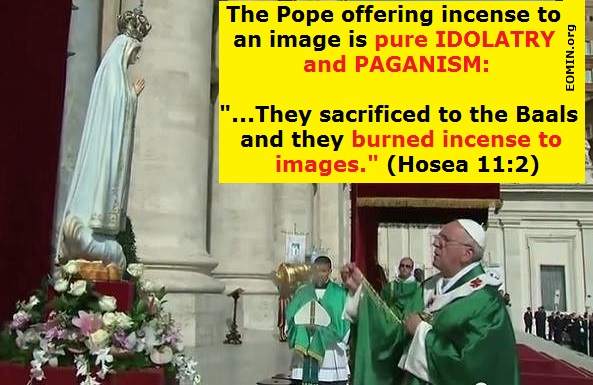 If his reign is only five years at most, as he is saying, there are only three more years left.

“‘I have the feeling that my Pontificate will be brief, 4 or 5 years; I do not know, even 2 or 3,’ the 78-year-old pontiff told Mexican broadcaster Televisa.

‘I feel that the Lord has placed me here for a short time, and nothing more,’ he added, comparing the feeling to ‘a gambler who convinces himself he will lose so he won’t be disappointed. And if he wins, he’s happy.’ (ABCNews)

Regardless, if Pope Francis reigns longer or ends today, the next pope will be just as heretical as he is and will also stand with the official teachings of Catholicism to the harm of over 1 billion people. Though Pope Francis has chosen to make a guest room at the Vatican his residence, that doesn’t mean he is sound doctrinally. Though Pope Francis has given a papal blessing to Kenneth Copeland (and Copeland back to him), he remains an idolater totally deluded about the gospel of Jesus Christ, which alone can set a person free from his sin addictions. [In September 2015 Pope Francis will address the US Congress!]

This entry was posted in Catholicism, Pope Francis Says His Term Will Be Five Years At Most and tagged kenneth copeland, pope francis, pope francis term as pope, popery. Bookmark the permalink.