If you knew Kenneth Copeland had serious spiritual problems just based on his Prosperity message and extravagant living, you were Biblically correct! It clearly gets worse, however, in a most extreme way, through his anti-scriptural unity with Catholicism! Such false unity is more evidence of Kenneth Copeland’s inabilities as a spiritual leader. His bold ecumenical unity could stumble the whole Word Faith movement even further from the Biblical truth and into the Catholic Church, which even rejects the Bible as final authority! Kenneth Copeland’s push towards unity with Roman Catholicism is appalling to me, especially as a former Catholic. I know from first-hand experience the powerless gospel Catholicism presents as it declares one is born again at infant baptism, among other things.

Kenneth Copeland has allowed his personal friend Tony Palmer (who is also a close friend of the present pope and the former past two popes) to speak to his crowd of Word Faith preachers. Tony Palmer, an Anglican Episcopal Bishop, had one primary goal — to unify Kenneth Copeland’s whole group under the Pope! What Kenneth Copeland allowed to occur was monumental, as over time, it surely will prove to bring some unwary precious souls under the sway and deadly influence of Roman Catholicism. The ecumenical movement, and its ultimate unity under Roman Catholicism, is alive and well, especially in some Pentecostal circles like Word Faith, where professing Christians over-emphasize spiritual gifts and seek for a sign or miracle with some claiming to speak to God in dialog! Kenneth Copeland himself has given the clear impression, multiple times, that he is conversing with Jesus on his teaching  platform while preaching! What Kenneth Copeland and Tony Palmer are promoting is a false Christian unity, not the unity the Bible speaks of and which should be promoted by Christians. It is the exact oppose and dangerous. The Holy Spirit is opposed to such a counterfeit unity with darkness.

NON unity and NON tolerance are also key Biblical teachings, stressed by Paul and the Lord Jesus. Such strict NON-unity is a definite command and safeguard for souls. Ponder these precious directives carefully and don’t be duped by present day ecumenical unity:

But now I am writing you that you must not associate with anyone who calls himself a brother but is sexually immoral or greedy, an idolater or a slanderer, a drunkard or a swindler. With such a man do not even eat.  (1 Cor 5:11)

Do not be yoked together with unbelievers. For what do righteousness and wickedness have in common? Or what fellowship can light have with darkness? What harmony is there between Christ and Belial ? What does a believer have in common with an unbeliever? What agreement is there between the temple of God and idols? For we are the temple of the living God. As God has said: “I will live with them and walk among them, and I will be their God, and they will be my people. Therefore come out from them and be separate, says the Lord. Touch no unclean thing, and I will receive you. I will be a Father to you, and you will be my sons and daughters, says the Lord Almighty.” (2 Cor 6:14-18)

You adulterous people, don’t you know that friendship with the world is hatred toward God? Anyone who chooses to be a friend of the world becomes an enemy of God.  (James 4:4)

Nevertheless, I have this against you: You tolerate that woman Jezebel, who calls herself a prophetess. By her teaching she misleads my servants into sexual immorality and the eating of food sacrificed to idols. (Rev 2:20)

Shocking but true,Ulf Ekman, the founder of a 3,000+ Word Faith Prosperity message ministry in Sweden, on March 9, 2014 announced he is joining Roman Catholicism! Certainly, Kenneth Copeland’s agreement with Pope Francis for unity didn’t hinder his decision! Furthermore, please note who changed with the unity push from Kenneth Copeland. It wasn’t Catholics coming out of Catholicism, but a Word Faith leader going into Catholicism, just as the Pope wanted! (Ulf Ekman’s example will likewise lead more souls into Catholicism and under Popery.)

The founder of a 3,300-member megachurch in one of Sweden’s largest cities announced yesterday [Sunday, March 9] his decision to leave his charismatic congregation and join the Roman Catholic Church. 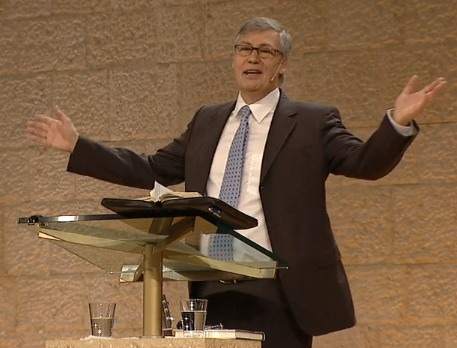 …”I have come to realize that the movement I for the last 30 years have represented, despite successes and much good that has occurred on various mission fields, is part of the ongoing Protestant fragmentation of Christendom,” Ekman wrote in an op-ed for Swedish newspaper Daegens Nyheter. ( http://www.christianitytoday.com/gleanings/2014/march/sweden-pentecostal-converts-catholicism-ulf-ekman-word-life.html )