Rick Warren is a very popular and beloved figure among the religious. Few in our day have never heard of Rick Warren. 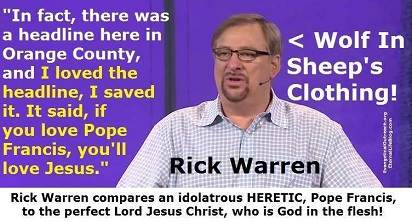 His religious influence over others is great and has spread all over modern-day “Christianity,” but that surely is NOT good! Rick Warren is an eternal security teacher, which is bad enough, but he is much more! He is also a BOOTLICKING CATHOLIC COMPROMISER (and Chrislam promoter)! There are 1.2 billion Catholics, many of whom are very sincere, as they dangerously reach out to their sinless and sovereign Mary (who they think dispenses all grace) for their salvation. She is their “life sweetness and hope,” who they consecrate themselves to and pray to. She is “the way” to God, as the “approved” Fatima apparitions boldly proclaim. The supreme leader of all Catholics and endorser of those pagan and demonic concepts is the Pope, who Rick Warren promotes as someone great – even with a comparison to the perfect Lord JESUS Christ! Shocking and disgraceful! He said:

Catholics desperately need God’s truth, not to hear how great their heretical and idolatrous blind leader is! 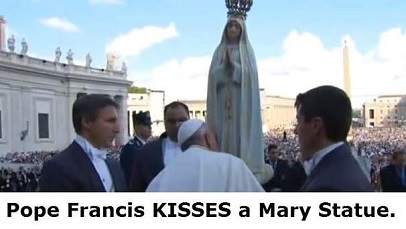 Rick Warren has gained fame, popularity and wealth by teaching doctrines of demons and complimenting servants of the devil. Warren is now worth $25 million! Though this critique of Rick Warren is “politically incorrect” language in our apostate day, it is true. [I could case less about being politically incorrect because SOULS need rescued!] Along his way to fame and fortune, Rick Warren has spread religious lies and sin by his teachings, which have sent untold thousands into fiery torment beyond the grave, with more following!

Who Is Ecumenical Pope Francis

According to Catholicism, Pope Francis is supposed to be the successor of Peter, the first pope. He is the “vicar of Christ” and shepherd of the whole body of Christ! He is chief teacher of all teachers, as has been all the other popes who preceded him over the centuries. He allegedly holds the keys of the kingdom and is the supreme interpreter of scripture for us. He speaks infallibly when he speaks ex cathedra! That is true to Catholicism, but chilling! Such unscriptural dogmas have led to a vast array of pagan beliefs, Catholic councils and anathemas, condemning all who are not Catholic!

Click Here To Be Shocked About What Past Popes Taught

Catholicism also claims to uniquely have the power through their priests to transubstantiate bread and wine into the body, blood, soul and divinity of Jesus Christ! That is a SHOCKING CLAIM, but it gets worse. Catholicism teaches the Eucharist should be “worshiped as God” and is what Jesus referred to in John 6:53,54!

Jesus said to them, “I tell you the truth, unless you eat the flesh of the Son of Man and drink his blood, you have no life in you. Whoever eats my flesh and drinks my blood has eternal life, and I will raise him up at the last day. (John 6:53,54)

Pope Francis would be the first to agree to all that and would say a baby is born again at infant baptism! He believes in and practices bowing before and kissing images, praying the rosary, canonizing saints, etc. Pope Francis embraces the whole ugly ball of wax, which makes Roman Catholicism what it is, but what it is, is NOT something good for SOULS! As with any false gospel, the Catholic gospel has no power to set a person free from his sin addictions! The most faithful Catholic remains spiritually dead and lost as he confesses to the priest, cries out to Mary, receives the Eucharist and wears his brown scapular. 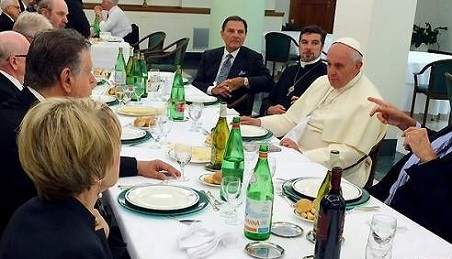 By endorsing Pope Francis, Rick Warren is endorsing all of those errant beliefs and pagan practices — helping to keep 1.2 billion Catholics deceived and bound by the devil. Furthermore, uninformed non-Catholics are being misled about Catholicism by Rick Warren just as they have been by Kenneth Copeland!

Rick Warren is a disgrace. Rick Warren is an exalted and successful preacher in our day, but a disgusting and miserable example of a spiritual leader because of the harm he has and is doing to SOULS. Again, people need TRUTH, as found in the bible, to become saved and stay saved. That truth is not found in any false religion (including Catholicism), but in scripture alone.

Did you know of the many pagan beliefs which Catholics embrace, venerating images is important, but often overlooked. Be assured that Pope Francis agrees fully with the following. Ponder this Vatical Council II endorsement:

“Moreover, that the images of Christ, of the Virgin Mother of God, and of the other saints are to be placed and retained especially in the churches, and that 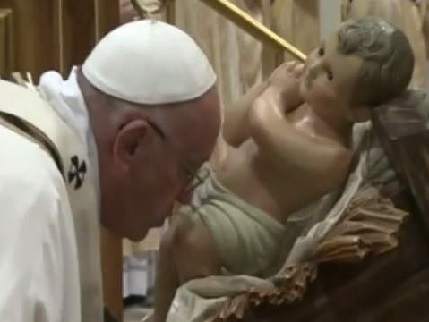 due honor and veneration is to be given them … but because the honor which is shown them is referred to the prototypes which they represent, so that by means of the images which we kiss and before which we uncover the head and prostrate ourselves, we adore Christ and venerate the saints whose likeness they bear …. great profit is derived from all holy images, not only because the people are thereby reminded of the benefits and gifts bestowed on them by Christ, but also because through the saints the miracles of God and salutary examples are set before the eyes of the faithful, so that they may give God thanks for those things, may fashion their own and conduct in imitation of the saints and be moved to adore and love God and cultivate piety. But if anyone should teach or maintain anything contrary to these decrees, let him be anathema.” (H. J. Schroeder, O. P., The Canons And Decrees Of The Council Of Trent, Tan Books and Publishers, Inc., 1978, p. 216)

Yes, there are similarities between Catholicism and Christians in some doctrines, but that doesn’t mean the differences are insignificant or anything less than DEADLY. The truth is, if you believe Catholicism, with its EXTREME claims, you must also logically accept the Council of Trent which condemns ALL non-Catholics who stand on bible truths! You will also be without the salvation the bible speaks of! Rick Warren is popular, but popularity surely doesn’t reveal success! For your own good, reject what Rick Warren and Pope Francis teach and stand for.