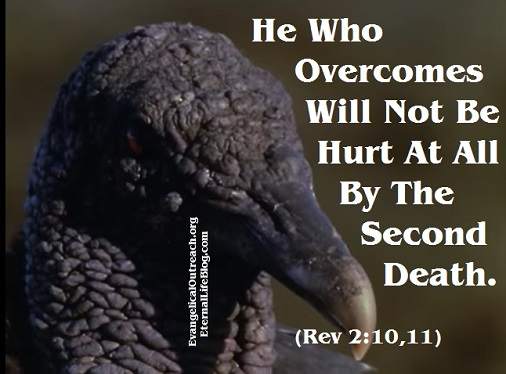 Sometimes in the Bible, multiple names are given for the same thing. For example, lust in the heart is another name for adultery (Mt. 5:28,29) and greed is another term for idolatry (Col. 3:5), but it doesn’t stop there. The lake of fire has another name. Strangely it’s the second death (Rev. 20:14). The term second death is found three other times in the Bible. Rev. 20:6 tells us who will escape it:

Blessed and holy are those who have part in the first resurrection. The second death has no power over them, but they will be priests of God and of Christ and will reign with him for a thousand years.

You must be blessed and holy to avoid the second death. The blessed are described through the New Testament such as in Mt. 5:3-12; 11:6; etc. and the holy are the same as those who do God’s will (Mt. 7:21; Lk. 8:21; Rom. 6:22; etc.) If you aren’t being depicted as such, hopefully you can sense the great danger you are in and repent to alter your future second death! The details about the second death continue on:

Be faithful, even to the point of death, and I will give you the crown of life. He who has an ear, let him hear what the Spirit says to the churches. He who overcomes will not be hurt at all by the second death. (Rev 2:10,11)

Please don’t think that only Rev. 21:8 describes the ones who will go to the fiery lake of burning sulfur (the second death). Other Scriptures add to that list (1 Cor. 6:9,10; Eph. 5:5-7; Gal. 5:19-21; Mk. 7:20-23; Rev. 22:15; etc.) If you are described there you need to act on the Biblical plan of salvation, which includes repentance and faith in the Lord Jesus. If you are a backslider, God wants you back, but you must turn away from your sins. Don’t be deceived! You can NOT sin and get away with it. Turn to God today. Don’t delay. Tomorrow may be too late. You don’t have to experience the second death, but will unless you endure to the end (Mt. 10:22).

This entry was posted in Second Death and tagged final end in fire, lake of burning sulfur. Bookmark the permalink.

One Response to The Second Death