1 John 2:19 is of major importance to the eternal security proponents. They misuse 1 John 2:19 with their never really saved argument when a professing Christian turns to gross immorality, and in a futile effort to conceal their license for immorality doctrine. 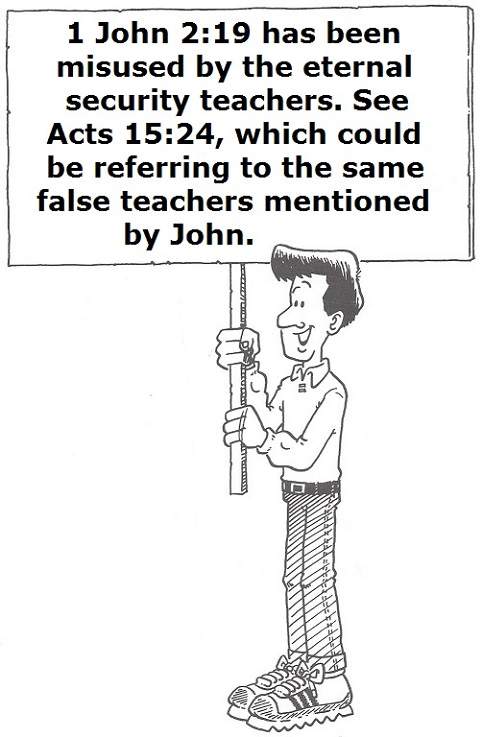 The context of 1 John 2:19 excludes the subject of immorality and shows it refers only to false doctrine taught by false teachers. Thus the eternal security teachers are misusing 1 John 2:19 for such:

They went out from us, but they did not really belong to us. For if they had belonged to us, they would have remained with us; but their going showed that none of them belonged to us. (1 John 2:19)

When we compare Scripture with Scripture and connect 1 John 2:19 to verses in Acts 15, we have important additional insights. Acts 15 details the Jerusalem council, which was presided over by James (not Peter) and convened over the false teaching that the Gentile disciples, in order to be saved, would have to be circumcised, according to the custom of Moses, and obey the law of Moses. Their exact false teachings are shown here:

Some men came down from Judea to Antioch and were teaching the brothers: “Unless you are circumcised, according to the custom taught by Moses, you cannot be saved.” (Acts 15:1)

Then some of the believers who belonged to the party of the Pharisees stood up and said, “The Gentiles must be circumcised and required to obey the law of Moses.” (Acts 15:5)

The conclusion of that church council, in part, stated the following about those false teachers:

We have heard that some went out from us without our authorization and disturbed you, troubling your minds by what they said. (Acts 15:24)

The Apostle John might have been referring to the exact same false teachers, who were initially opposed by Paul and Barnabas in sharp dispute and debate (Acts 15:2) and which brought about the need for the Jerusalem Council! John was also at the Jerusalem Council. If he wasn’t referring to the same false teachers, it was ones just like them! The lethal seriousness of believing certain false doctrine is shown by John, showing he was NOT a once saved always saved teacher, as some might think:

See that what you have heard from the beginning remains in you. If it does, you also will remain in the Son and in the Father. And this is what he promised us–even eternal life. I am writing these things to you about those who are trying to lead you astray. (1 John 2:24-26)

The book of Galatians addresses this same type of false doctrine as dealt with at the Jerusalem council. Today, such is similar to what the Hebrew Roots people teach!

In conclusion, 1 John 2:19, like every argument used for once saved always saved, is misused somehow. The believer’s security is conditional. A Christian must continue in the faith to be finally saved, which doesn’t always happen. There have been many lethal spiritual tragedies in Christianity. Spiritual death can occur to the righteous!