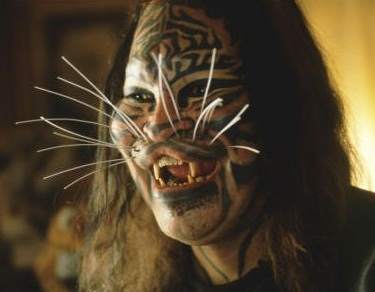 He spent tons of money on operations, injections, tattoos, etc. for that and apparently had found his life so intolerable at age 54 that he committed suicide! Dennis Avner is another example of a tragic wasted life, like Elvis Presley, Whitney Houston and others.

Why would Dennis Avner (Stalking Cat) pursue such a strange goal? Answer: It was because of his false religious beliefs! Avner grotesquely modified his body, including his teeth, in honor of the tiger!

A former U.S. Navy veteran-turned-programmer, Stalking Cat had “felt his spirit…called to the wild and [had] made it his goal to modify his body in honour of the tiger,” his totem animal, says Jodie Michalak of About.com. (http://www.huffingtonpost.co.uk/2012/11/14/dennis-avner-stalking-cat-dead-54-apparent-suicide_n_2128555.html#slide=1755372)

The Totem Animal of Cat Man

In his own words, Avner explains what his totem is to him:

What I’m doing is, I’m following a very old Huron tradition which involves getting closer to my totem, which are cats. A totem is a spirit animal. They’re a guide. ( youtube video )

Well, the cat is my totem which is my protector, my strength, my power and also my animal instinct, my way of looking at things. I see things as a cat would see things. ( http://www.zentastic.com/bmeradio/Cat.mp3.)

Dennis Avner, who is half American Indian, also said at an earlier age he got into drugs and alcohol because he was denying he was a cat! 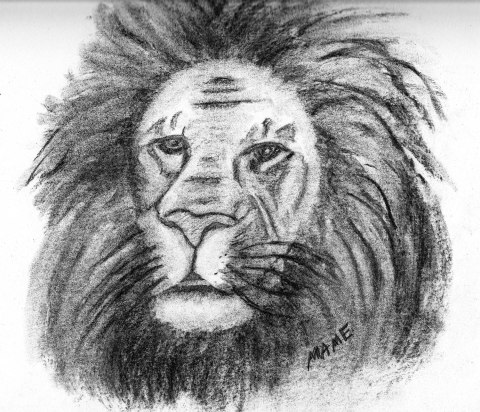 Imagine that! How could any person come to such a conclusion as that? The answer regarding many people is demons! Demons can successfully play lethal games with a person’s mind, especially when false religious beliefs are also involved. In the end, Avner’s totem animal and spirit guide, who he said was also his protector and strength didn’t protect him from himself!

Regardless what the false religious belief is, the Biblical message will help straighten out a person’s thinking and behavior, if he acts upon that vital message. The only way to find peace with God and rest for your soul is through the Lord Jesus Christ (Mt. 11:29). One can only imagine how things could have been wonderfully better and different for Cat Man Dennis Avner had he come to truly know the God who created all life, including cats.