Child Of The Devil 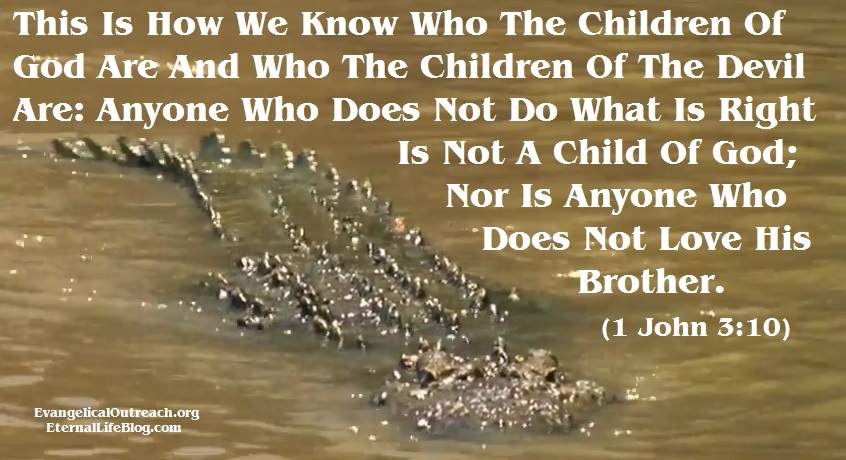 A child of the devil is recognized by his present tense wicked behavior. Though that fact flies square in the face of popular theology, it is a definite fact and one which needs to be remembered and taught. That concept is true grace and basic Christianity. All professing evangelicals (gospel preachers) should be in agreement, but are actually poles apart as ungodly allowances for sin are made by some, especially the once saved always saved Calvinistic types. With that being said, carefully ponder the following truth:

By not doing the right things and not loving the Christian brothers, one is identified as a child of the devil! His sins of omission expose him. That is first century Christian teaching. Hand in glove with that is a corroborating passage from Acts. It tells about a man named Sergius Paulus, who wanted to hear the word of God from Paul and Barnabas, but a person was trying to hinder that. He was Elymas the sorcerer, who opposed Paul and Barnabas and tried to turn Sergius Paulus from the faith. Paul, filled with the Holy Spirit, looked straight at Elymas and said to him:

You are a child of the devil and an enemy of everything that is right! You are full of all kinds of deceit and trickery. Will you never stop perverting the right ways of the Lord? (Acts 13:10)

Paul knew he was a child of the devil by his present tense wicked behavior. If he was ever saved prior to that point meant nothing! He was a lost child of the devil at that point as his behavior revealed. He was both a sorcerer and an enemy of the Christian gospel. He was opposed to another even hearing the truth about the Lord Jesus Christ. He was on the broad road to the fiery lake of burning sulfur, with other children of the devil:

Only repentance and a heart change through faith in the Lord Jesus would change their fiery future. They needed to become new creations in Christ. If you are a child of the devil, you are like them.

This entry was posted in Child Of The Devil, Once Saved Always Saved and tagged child of God, repentance, salvation, servant of satan, wicked behavior. Bookmark the permalink.