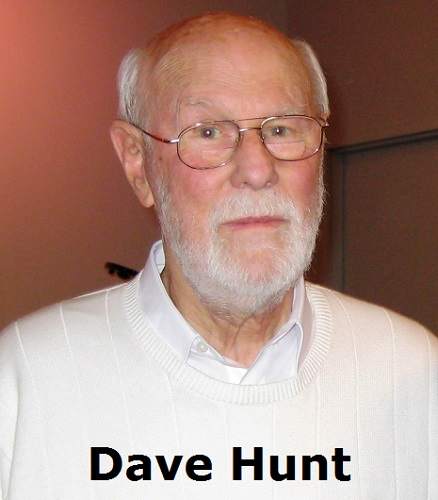 Dave Hunt is dead. He died on April 5, 2013 in his eighties. He was a hero figure for many professing Christians, especially since he shot into stardom with the book opposing the faith movement and the gospel of greed. His research was notable, but NOT always accurate! Dave Hunt’s massive distortion and misrepresentation of James Arminius’ supposed belief in eternal security was reprehensible and repulsive. It seems that Dave Hunt was trying to convince his audience that he himself was a true Arminian, who believed in eternal security like James Arminius supposedly did and, therefore, he was not a Calvinist! He was wrong. Dave Hunt was a one point Calvinist, who distorted grace into a license to sin and also supported a pre-tribulation rapture.

The most commendable thing I have noticed about Dave Hunt was that he changed his position on Roman Catholicism.  In fact, he did a 180 degree change to his credit. At one time, Dave Hunt publicly defended Catholicism as a Christian group, but later reversed his teachings on Catholicism to openly oppose it! Dave Hunt is the only big name I know who has ever made such a significant and noble change as that!

Bottom line, though Dave Hunt influenced hundreds of thousands with his books and other teachings, he mixed in the heretical doctrine of once saved always saved to his own shame and harm, as well as his supporters. He has been a major support of that counterfeit grace for years. He, sadly, wouldn’t be swayed from such a license to sin in spite of all the mountainous Scriptural evidence against it and NO solid evidence from Scripture for support. His endorsement and promotion of Laurence Vance shows how far off Dave Hunt was in that area about the Christian life. By teaching wrongly about salvation itself, his entire Berean Call countercult ministry, which was supposed to expose deception in the church, was ruined on that point alone. Dave Hunt himself was part of the deception in the so-called church, which he was supposed to counter.

It’s too late for Dave Hunt now. There is no evidence he ever renounced the fifth point of Calvinism to embrace the truth of a conditional security for the believer in Christ. That means Dave Hunt left this world as a one point Calvinist and left a legacy behind him through his successor, T. A. McMahon, which will continue to fatally snare people about reaping eternal life without holy living (Gal. 6:8,9). I once met T. A. McMahon in Ohio and had a brief discussion with him about eternal security before he walked away. I asked him if he believed a person can be a Christian and an adulterer at the same time and he said, “You know I do!” So the Berean Call was fatally flawed when Dave Hunt was alive and is now in the hands of a man who will probably keep it the same way to the harm of SOULS. The debunking countercult ministry of Berean Call needs to be debunked by Christians for the sake of all who have ears to hear!

[Listen to a mini radio debate on eternal security between Dave Hunt and Dan Corner, the author of the 801 page refutation to eternal security entitled, The Believer’s Conditional Security.]