The Doomsday Clock is an imaginary clock showing how humanity is destroying itself with nuclear weapons and the related. According to the Science and Security Board of the Bulletin of Atomic Scientists, it is positioned at 5 minutes till midnight for earth’s destruction! 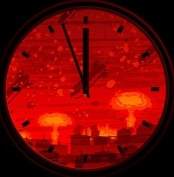 The Doomsday Clock is related to a “civilization-threatening technological catastrophe.”

The Doomsday Clock is the invention of the Bulletin of Atomic Scientists, a publication started by some of the researchers who worked on the atomic bomb. The wife of one of these researchers, Martyl Langsdorf, was a painter. In 1947, she illustrated the first Bulletin cover to feature the Doomsday Clock set at that point at 11:53 p.m.

Fukushima and The Doomsday Clock

The Fukushima, Japan nuclear meltdown that occurred in 2011 is an example of a major nuclear accident that is quickly destroying our planet, though mainly hushed up. At this point in time, radiation from Japan has already reached the western coast of California and elsewhere. One can only speculate how ocean fish, plant life, animals and people eating them (and other radiated things from the waters) have already been poisoned. Furthermore, the world’s oceans all seem to be endangered by Fukushima with its poisoned radiated waters. Though some would like to tie that into an end time Biblical connection to Wormwood, Scripture doesn’t directly refer to that catastrophe.  The Wormwood event mentioned in Rev. 8:11 is not Fukushima, even though the killer waters from it will be affected too. Why? Wormwood fell from the sky:

The third angel sounded his trumpet, and a great star, blazing like a torch, fell from the sky on a third of the rivers and on the springs of water — the name of the star is Wormwood. A third of the waters turned bitter, and many people died from the waters that had become bitter. (Rev 8:10)

The hand writing is on the wall! The end is drawing nearer and the Doomsday Clock is ticking away. IF we live to die a natural death or not, our earthly life is limited and there is NO real lasting hope here for anyone. No one is getting out of here alive (Heb. 9:27)! We are all going to die and that is a fact of life. Don’t believe the deceived scientists, like Ray Kurzweil or anyone else who would say we can gain eternal life (their misuse of the Biblical term) through nanobots, genetics or any other way! The only way anyone can get true eternal life is by having the Lord Jesus as their own personal Lord and Savior. The grave is NOT the end, but the real issue is WHERE WILL YOU GO AFTER DEATH? Never forget that your SOUL is your most valuable possession. To escape hell and enter a Paradise environment, we MUST be walking holy and doing the will of God, as we have 100% faith and trust in the Lord Jesus for our salvation. (We are not saved by our good works.) If we are not living holy, our current Christian profession and so-called Christian faith is worthless to save us from our sins and the damnation of hell. With or without the Doomsday Clock ticking away and earth’s nuclear weapons and accidents, our own personal natural life is vanishing, even without the tikker death clock to verify it. Do you know Jesus NOW? Are you ready to die and leave everything in this life behind to enter eternity? Be sure your personal Doomsday Clock is approaching midnight, with or without Fukushima and the approaching Antichrist!