According to Gabriele Amoreth in an interview, Satan is more afraid of Mary than the Lord Jesus: 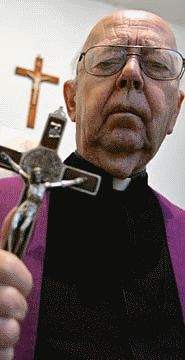 Ah, when you invoke Mary!” “And, once I also asked Satan, ‘but why are you more scared when I invoke Our Lady than when I invoke Jesus Christ?’ He answered me, ‘Because I am more humiliated to be defeated by a human creature than being defeated by him.” ( http://www.ewtnnews.com/catholic-news/Vatican.php?id=3219   )

To hear someone (who is supposed to be an expert in dealing with demons and Satan) quote Satan as though the Father of lies (John 8:44) was speaking the truth when Jesus is demoted and Mary is exalted above him is stunning! How could, even a Catholic priest be so duped, as Gabriele Amorth is? But wait, Catholicism typically has exalted Mary as the rival of Jesus Christ and sometimes has replaced him with Mary! Consequently, when Gabriele Amorth believes what was supposed to be the devil, because the devil’s message parallels Catholic doctrine on Mary, we shouldn’t be too surprised! Remember: Bible truth is not primary in Catholicism, especially when it conflicts with Catholic dogma.

Jesus Is Interceding From The Throne

Gabriele Amorth also taught this about the Madonna’s (Mary’s) Intercession:

And the most powerful intercessor of all? “Of course, the Madonna is even more effective [than Pope John Paul II]. (ibid.)

As far as intercessors are concerned, the truth is, Jesus is actually interceding from the right hand of God in heaven for us now (Rom. 8:34)! That makes the Lord Jesus, in reality, the most powerful intercessor of all. Mary is not even in the ballpark for that title, as Gabriele Amorth says, much less sovereignly ruling from heaven’s throne as Queen of Heaven with Jesus by her side (as is typically believed in Catholic circles). That makes the Catholic heaven just as mythical as their non-existent Purgatory. [From this alone, we get another clear picture of how horrendous it was for Word Faith prosperity teacher Kenneth Copeland to agree with and pray for the Pope and the unity he wants.]

BTW, Gabriele Amorth also uses a crucifix, holy water and verbalizes he has the Madonna on his side during his exorcisms ( http://www.boston-catholic-journal.com/an-interview-with-father-gabriele-amorth-the-church%27s-leading-exorcist.htm  )! Folks, all that is religious fiction, especially about Mary. Also, if we needed a crucifix when we cast out demons in Jesus’ name, then how did the disciples successfully do that before the Lord’s crucifixion (Lk. 10:17), since they had no clue that was ever going to happen much less what a crucifix was, since it never existed then? Obviously, well-known and respected Catholic priest, Gabriele Amorth, is glaringly wrong again and should be ignored as a credible source for spiritual truth. May Catholics learn from this and consult the tried and true Holy Bible for God’s truth on any issue, including exorcisms and especially salvation.