The context of a passage is vital in deriving the proper meaning. A prime example of this is Mt. 18:1-3, which absolutely annihilates the license for immorality commonly called eternal security (or once saved always saved). Here is the passage under scrutiny:

At that time the disciples came to Jesus and asked,”Who is the greatest in the kingdom of heaven?” 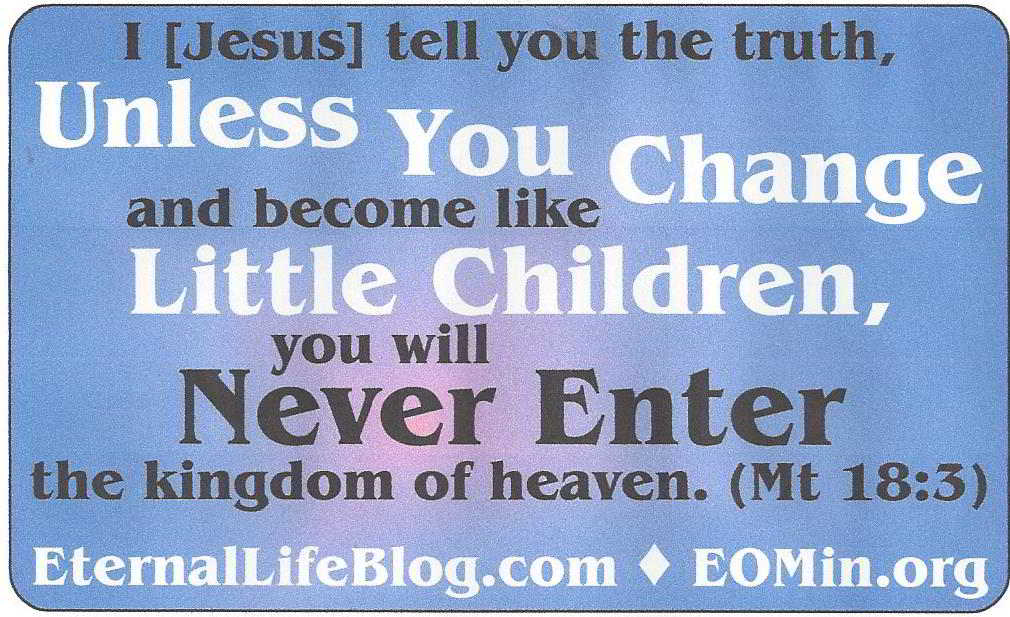 He called a little child and had him stand among them. And he said:“I tell you the truth, unless you change and become like little children, you will never enter the kingdom of heaven.” (Mat 18:1-3)

The Context of Mt. 18:3 Is Ignored or Distorted To Protect Eternal Security

Never in my life have I ever heard verse 3 used in its proper context, that is, as being spoken to the Lord’s disciples (saved people)! Many will object and say, “Aren’t the Lord’s disciples mere learners”? Not according to Jesus! Earlier in Matthew’s gospel, Jesus describes his own disciples as his spiritual family:

He [Jesus] replied to him, “Who is my mother, and who are my brothers?” Pointing to his disciples, he said, “Here are my mother and my brothers. For whoever does the will of my Father in heaven is my brother and sister and mother.” (Mat 12:48-50)

Humble Yourself or Go To Hell

Jesus told the saved they would have to do something for themselves to enter God’s kingdom, even though they had salvation at the moment! That is impossible language, if eternal security was true. Furthermore, that same unheard of truth in our day was spoken by the Lord Jesus himself, the most credible teacher! Hence, it was a critical time for the disciples. Something was going to interfere with their final salvation (their entrance into God’s kingdom), unless they would change. The next verse (Mt. 18:4) shows the remedy was humbling oneself like a little child.

The disciples had asked, “Who is the greatest in the kingdom of heaven?” (Mt. 18:1). At other times they were arguing over who was the greatest among themselves! In Mark we read:

They came to Capernaum. When he was in the house, he asked them, “What were you arguing about on the road?” But they kept quiet because on the way they had argued about who was the greatest. Sitting down, Jesus called the Twelve and said, “If anyone wants to be first, he must be the very last, and the servant of all.” He took a little child and had him stand among them. Taking him in his arms, he said to them, “Whoever welcomes one of these little children in my name welcomes me; and whoever welcomes me does not welcome me but the one who sent me.” (Mark 9:33-37)

May all Christians in ministry learn an important lesson from this. You are not in God’s kingdom yet. You are traveling the hard road to life (Mt. 7:14) and many alongside you will fall away. Some may never get saved again. To know about staying humble like a little child, could be the pivotal issue for you. Don’t risk eternal life for anything. There absolutely is NO eternal security, according to Jesus. The language of his teachings doesn’t allow for it. Remember the context of the passage, “I tell you the truth, unless you change and become like little children, you will never enter the kingdom of heaven.”