The First 100 Years of Christianity

[Comments from a Catholic ] Lets stick to the first 100 years. Seventy years after the Resurrection we have Ignatius telling those he wrote to stay close to the Bishop, and denouncing those who rejected that the Eucharist was Body and Blood of Christ. Sixty years after the Resurrection we have Clement writing Corinth exhorting them to reinstate a priest they had expelled (which they did). Clement was Bishop of Rome at the time…. In structure, sacrament, etc., the Church then was, as the Church now, Catholic. 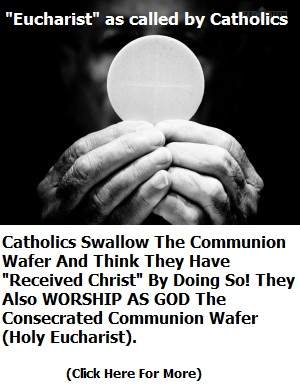 This was before the Gospel of John was even written and it coincides to exactly what Saint Paul said in the new testement [sic] writings> 1 Corinthians 11:26 “For as often as you eat this bread and drink the cup, you proclaim the Lord’s death until He comes. Therefore whoever eats the bread or drinks the cup of the Lord in an unworthy manner, shall be guilty of sinning against the body and the blood of the Lord, a man must examine himself. Ignatius was a disciple of John the Apostle….

[Bible Answer] Thanks for bringing up these issues.  Your arguments are based on the assumed authority of the ante-Nicene fathers [which is NOT accurate]. The Catholic Church considers them Sacred Tradition and equal to God’s written word (along with Catholic church councils and papal decrees), which is both wrong and impossible. Why? It is impossible to have two divinely inspired truths in contradiction to each other and both be truth. Either one is wrong or the other one is wrong, but both can NOT be true! That is the law of non contradiction and exactly what the evidence reveals.

You cited writings which are supposed to be early and accurate. They might be from Ignatius and Clement as claimed. So let’s assume they are and not fakes as was sometimes the case back then! IF what you quoted was accurately stated, they are wrong, but since you didn’t document those quotes, I can’t verify them or check the context! Hence, we can’t really know if they are really accurate. That weakens your arguments even further since they may not even be close to their actual beliefs on communion.

Moreover, even though someone is accurately taught at one point does not necessitate he will embrace those truths and perpetually believe them! The Bible cites various examples of such sad occurrences. Note the following one:

Their teaching will spread like gangrene. Among them are Hymenaeus and Philetus, who have wandered away from the truth. They say that the resurrection has already taken place, and they destroy the faith of some. (2 Tim 2:17,18)

Hymenaeus and Philetus were once sound in doctrine, but became dangerous false teachers who destroyed the faith of some Christians. That fact blows away your foundation since that can happen to anyone as it did in the primitive church. That is why Christians are told to test everything (1 Thess. 5:21) and everyone (1 John 4:1) with Scripture (2 Tim. 3:16,17). You do not do that and remain dangerously misled, as sincere as you may be.

Most importantly, Jesus endorsed the Old Testament as God’s word and promised the New Testament. Hence, the Bible is the standard of truth and basis of all Christian teaching (2 Tim. 3:16,17), not anything else, including the writings of the ante-Nicene so-called “fathers.”

The Bible does NOT teach as Catholicism does. The differences are in various important issues, including the Eucharist. Catholicism’s wild and extreme teachings about the consecrated communion wafer (which you call the Holy Eucharist) are:

IF those dogmas were true then NO person could have spiritual LIFE without communion, but that is NOT what we see. The dying thief entered Paradise without communion (and without baptism)! That should alert you that something is wrong in the way you (and me too) were taught about this. [FYI, I’m a Former Catholic.] Remember, the repentant thief got forgiven AFTER the first Lord’s supper (Lk. 23:42,43), but without having communion!

Furthermore, the Catholic priests have NO authority or ability (nor does anyone else) to perform a transubstantiation of the communion elements into the body, blood, soul and divinity of Jesus Christ! How can we be sure that it is NOT changed, as Catholicism claims? The Bible cites a real transubstantiation (Jn. 2:1-11). It was the water into wine miracle by Jesus. NOTE: a real genuine transubstantiation will TASTE like the substance it was changed into, but that does NOT occur in Catholicism!

To “worship as God” a communion wafer is idolatry (as is bowing before and kissing images) and will send all such offenders (even if sincerely religiously deceived) to the lake of fire (Rev. 21:8), if not forgiven through a genuine salvation, as found in Scripture. The Scripture from 1 Cor. 11:26 has nothing to do with Catholic communion, according to its context and the aforementioned errors in Catholic doctrine.

The real plan of salvation has nothing to do with the Catholic sacraments, Mary or being a Catholic. Take these truths and warning to heart. Your SOUL is in the greatest danger because of religious deception. Read and believe the contents of the New Testament (God’s word) to be safe. Your eternal destiny depends on it. You can read much more for Catholics by clicking here.

This entry was posted in Catholicism, The First 100 Years of Christianity and tagged Catholic, Catholicism, communion, eucharist, holy eucharist. Bookmark the permalink.