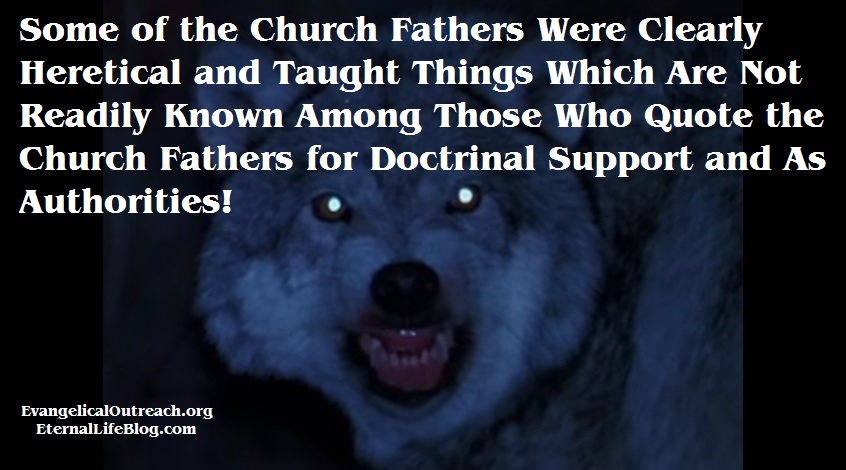 The devil is very slick. If he can’t deceive you one way, he’ll surely try another! For people who are convinced that the Bible is FINAL AUTHORITY, like the Christians are, the devil sometimes uses the so-called “Church Fathers” to recapture them, if possible, in a very subtle way! How is that possible?

No doubt, David Bercot has helped bring people back under papal authority and darkness. Many non-Catholics are now following in the steps of David Bercot by spreading his non-factual concepts, which include water baptism being necessary for forgiveness of sins!

To the surprise of some, among those who promote the church fathers (besides Catholicism and David Bercot) are Universalist Gary Amirault, the Watchtower Society (of Jehovah’s Witnesses) and Mormonism. Even Calvinism exalts Augustine of Hippo as someone great and a link between John Calvin to the Apostle Paul! (Too few know church father, Augustine of Hippo, prayed to Mary for his salvation.)

Some of the church father quotes cited by the Jehovah’s Witnesses, Mormons, etc. are out of context and distorted, but others are correct, showing the church fathers were NOT consistent or sound! (Besides, who picked those men and excluded others to finally decide the listing of church fathers?)

Finally, to say we need the church fathers, is also to say that the Holy Spirit is not the sufficient teacher and guide of humble Christians, who are earnestly seeking truth! Don’t be deceived! The Bible is the ONLY reliable source of spiritual information. To deviate from it is to wander off into spiritual darkness and deception. Do you know what the gospel of Jesus Christ is?