How Can 1.2 Billion Catholics Be Wrong

[Bible Question]  I am a born again Christian of many years and in the last few months starting attending RCIA classes in the small town where I live (mainly at the advice of the counselor I began seeing).  After just 2 classes I found I could no longer attend the classes because of the sincere doubt I have regarding all things Catholic.  I have found the people to be wonderful and very sincere in their beliefs. 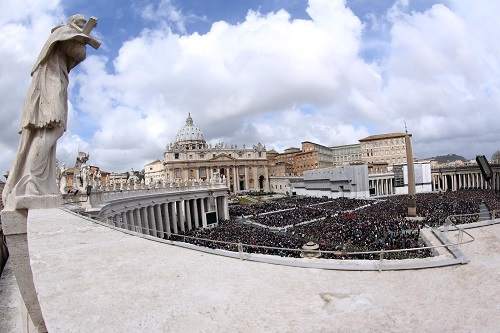 Unfortunately, I simply cannot believe many of their teachings.  My question is, how can 1.2 billion people be wrong about the Catholic church?  I also find many of them have advanced degrees and are highly intelligent…. I’m very confused about what is really true.  I have prayed diligently that the Lord will guide me to the truth.  I firmly believe in Sola Scriptura much to the dismay of the RCIA teacher here. Can you shed any light on this situation since you were once a Catholic? Blessings in the name of our Lord,

[Bible Answer] Greetings in Jesus’ name. Thank you for asking about Catholicism. When I was a Catholic, I wanted to stay a Catholic. However, when I started to read the Bible (Catholic Bible), I was thrown into confusion because of what it said! It didn’t align itself to what I was taught, especially about Mary. In the Catholic church I went to, we definitely heard more of Mary than Jesus. Other RCC may have been more moderate on Mary, but not ours. Hence, I expected to read much about her in the Bible. Not only was that missing, but what I read was the opposite of what I was taught. Lk. 11:27,28 floored me. In that passage, Jesus himself rebuked that Catholic-like woman over the very reasons why Catholicism exalts Mary!

The clearest way to know Catholicism is not only wrong, but DEADLY is their false plan of salvation (sacraments, Mary and being a Catholic) which will not save anyone from hell or set them free from their sin addictions in this life. Their whole religious system is a myth, built upon religious fairytales and fables. From Purgatory to mass being an unbloody sacrifice for sins to worshiping the consecrated communion wafer to papal infallibility to their co-redeeming, sovereign Mary reigning from the throne in heaven as Queen and the mediatrix and dispenser of all grace, etc. the Bible is contradicted! There are many Catholic deceptions. Hence, we must recognize such as not coming from the same source that gave us the Bible. The Bible is final authority (2 Tim. 3:16,17).  Go by the Bible 100% for all your doctrines and practices.

There are have been many intelligent atheists, Hindus, Muslims, Mormons, Jehovah’s Witnesses, etc. over the years who are now in hell. Intelligence is not the answer. One’s heart must LOVE TRUTH, that is God’s word. See John 18:37. Remember, conflicting messages both claiming to be truth cannot both be correct. Either one is wrong or they are both wrong, but both can’t be right. Hence, since Catholicism clashes with the Bible, it is wrong and should NOT be believed or practiced.

[When I was still a Catholic I wondered how could so many people be wrong?  Did you know there are more Muslims than Catholics? There were about 1.5 billion as of 2010. So how could the Catholics and Muslims (and Hindus and atheists, etc.) all be wrong? The Bible says the MAJORITY of people will go to hell, and only the MINORITY will enter heaven (Mt. 7:13,14).  Only the 8 people in Noah’s ark were saved at the time of the Great Flood. ALL others went to hell and the estimated population then was 2 BILLION because the people lived so long!]

NOTE: Catholicism is also rampant with idolatry — bowing before and kissing statues, “worshiping as God” the communion wafer, praying TO Mary, trusting in Mary, etc. — are idolatrous. Christians are to FLEE IDOLATRY (1 Cor. 10:14 cf. Rev. 21:8). This is all very serious. Eternity is a long time. [BTW, do you know about my book, “Is This The Mary Of The Bible?” If you can’t afford a copy and want to read it, we’ll send a FREE copy to you.] Remember:

“Dear friends, do not believe every spirit, but test the spirits to see whether they are from God, because many false prophets have gone out into the world.”  (1 John 4:1)

This entry was posted in Bible Answers, How Can 1.2 Billion Catholics Be Wrong and tagged 1.2 billion catholics, catholic church, Catholicism, Catholics, sola scriptura, what is true, what is truth. Bookmark the permalink.