How To Study the Bible The Right Way Part 4

Do you interpret scripture with scripture to correctly understand the bible? Appealing to a secular dictionary to understand biblical terms will often result in a gross misunderstanding of what the Bible really says! Let the Bible itself interpret its own terms when possible.

What or Who is the Word?

The mystery meaning of the Word is clarified in verse 14: 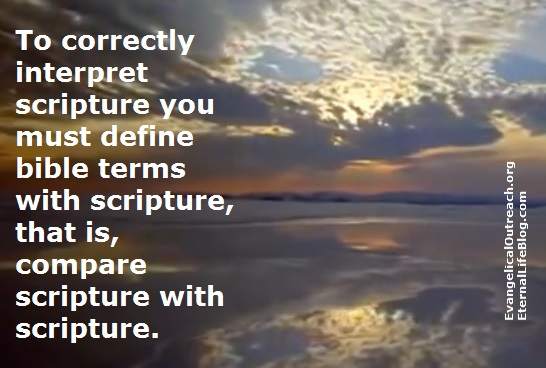 The Word became flesh and made his dwelling among us. We have seen his glory, the glory of the One and Only, who came from the Father, full of grace and truth. (John 1:14)

Now it becomes apparent that the Word in John 1:1 is the Lord Jesus Christ, showing among other things that Jesus Christ is deity and not the person of the Father. [Don’t be deceived by so-called bible translations, like the Jehovah’s Witness Bible.]

How To Study the Bible The Right Way, Part 3

What Is The Second Death?

…Be faithful, even to the point of death, and I will give you the crown of life. He who has an ear, let him hear what the Spirit says to the churches. He who overcomes will not be hurt at all by the second death. (Rev 2:10,11)

According to the above passage, the second death is a place of hurt, but what does that mean? We need more information to better understand the seriousness of not being faithful to God. The mystery is immediately solved by interpreting scripture with scripture:

How To Study the Bible The Right Way, Part 2

From Rev. 21:8, we know the second death is the same as the dreaded fiery lake of burning sulfur and will claim those listed, showing sin is still the issue. [Other verses show that list is not exhaustive.] A comparison of Rev. 2:10,11 and Rev. 21:8 show Jesus gave a hell warning to those already saved, thereby revealing the teaching of once saved always saved as a demonic lie and snare to one’s soul.

Who or What is the Dragon?

The dragon will be worshiped in the future. Is that good or bad?

Men worshiped the dragon because he had given authority to the beast, and they also worshiped the beast and asked, “Who is like the beast? Who can make war against him?” (Rev 13:4)

Again, to consult a secular dictionary for the word dragon will not result in the proper understanding of Rev. 13:4, but if we look in the Bible for an answer, especially the verses before and after any given verse, it becomes clear, who is the dragon:

The great dragon was hurled down–that ancient serpent called the devil, or Satan, who leads the whole world astray. He was hurled to the earth, and his angels with him. (Rev 12:9)

Mystery solved again. The dragon, who will be worshiped in the future on a global scale, is the devil (or Satan), based on Rev. 12:9! There will be no worldwide revival regardless how much we want one!

QUESTION: Who is the beast of Rev. 13:4, to whom the dragon gives his authority? The answer this time is inferred by the description in the immediate context, that is, he is the infamous antichrist himself. Notice the details about and characteristics of the antichrist:

The beast was given a mouth to utter proud words and blasphemies and to exercise his authority for forty-two months. He opened his mouth to blaspheme God, and to slander his name and his dwelling place and those who live in heaven. He was given power to make war against the saints and to conquer them. And he was given authority over every tribe, people, language and nation. All inhabitants of the earth will worship the beast–all whose names have not been written in the book of life belonging to the Lamb that was slain from the creation of the world. (Rev 13:5-8)

Now we learn about future events the accurate way, not through an occultist like Nostradamus, who made false prophecies and was demon possessed. Shockingly, the antichrist will have worldwide dominance and will be WORSHIPED by the people in society then! He will reign a total of forty-two months and will target the saints and overcome them! Rev. 13:7 is one of the most horrifying verses in the Bible. At that point in the future, the powerful prayers of the saints for deliverance will NOT be answered! It will be a TEST for the saints then. Will they remain faithful to God or give their allegiance to the antichrist and go to the lake of fire afterwards? The ONLY WAY to overcome is detailed in Rev. 12:7, one of the most important verses on spiritual protection for that point in time:

How To Study the Bible The Right Way, Part 1

Overcomers ARE WILLING TO DIE TO REMAIN FAITHFUL, if necessary. Your faithfulness to God is the real issue, not God’s faithfulness to you, as the once saved always saved heretics tend to magnify! Being faithful to God has always been the sure formula for success with God. Does that describe you? Are YOU ready to die for your faith NOW?

Are you willing to be HATED for Christ to remain faithful?

This entry was posted in How To Study the Bible The Right Way, Uncategorized and tagged how to study the bible, study the Bible. Bookmark the permalink.