Inri Cristo Claims To Be Jesus

Inri Cristo, a man from Brasilia, Brazil (where he says is the location of New Jerusalem) thinks he is the son of God reincarnated. 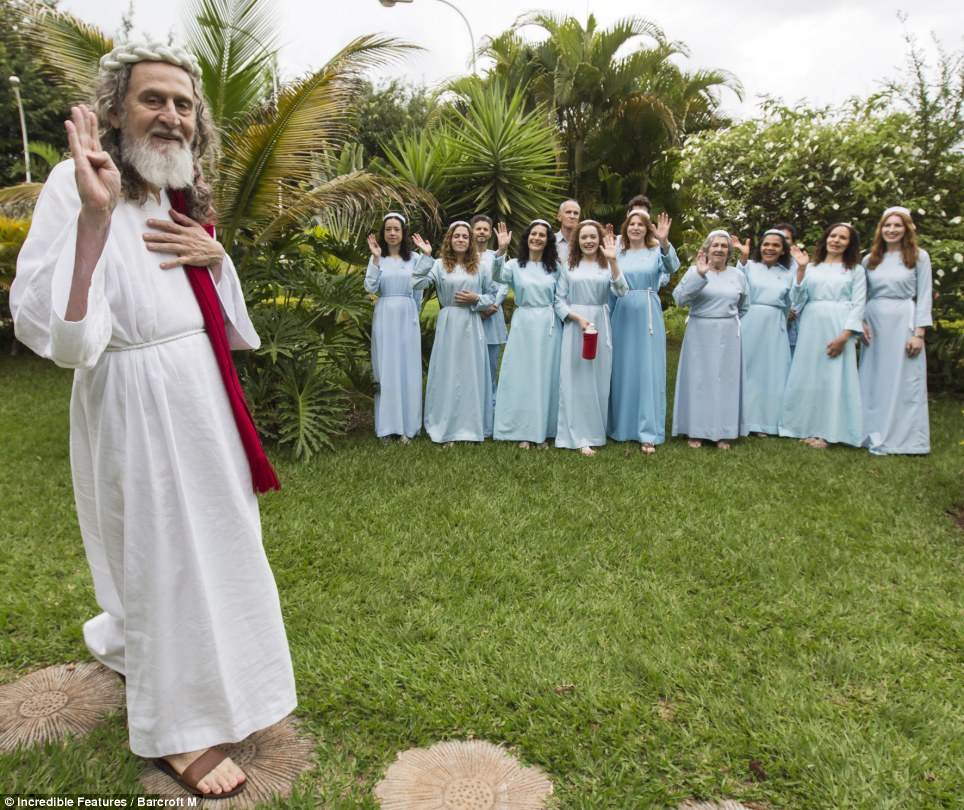 For 35 years this 66 year old man has been preaching and making dangerous false claims about his own identity.

Inri Cristo is just another deceiver and false christ, who has somehow hoodwinked some to become his devotees! The real Lord Jesus Christ foretold that there would be frauds like Inri Cristo who would arise and deceive people:

For false Christs and false prophets will appear and perform great signs and miracles to deceive even the elect–if that were possible.  See, I have told you ahead of time. “So if anyone tells you, ‘There he is, out in the desert,’ do not go out; or, ‘Here he is, in the inner rooms,’ do not believe it.” (Mat 24:24-26)

Inri Cristo got his name from the first letter of each of the following Latin words, which appear on modern crucifixes – INRI. Those Latin words are Iesus Nazarenus, Rex Iudaeorum, or in English: Jesus the Nazarene, King of the Jews. Anyone can make a claim, but that doesn’t mean it can be proven.

Since the real Jesus and Savior of mankind had the scars of his crucifixion in his hands, feet and side after he resurrected (Lk. 24:39,40; John 20:20,27), then Inri Cristo (if the same person) should display them for our scrutiny and examination. But even more convincing is the fact that the real Jesus will return from the sky and be seen by people:

“Men of Galilee,” they said, “why do you stand here looking into the sky? This same Jesus, who has been taken from you into heaven, will come back in the same way you have seen him go into heaven.”  (Acts 1:11)

Look, he is coming with the clouds, and every eye will see him, even those who pierced him; and all the peoples of the earth will mourn because of him. So shall it be! Amen.  (Rev 1:7)

I saw heaven standing open and there before me was a white horse, whose rider is called Faithful and True. With justice he judges and makes war. His eyes are like blazing fire, and on his head are many crowns. He has a name written on him that no one knows but he himself.  He is dressed in a robe dipped in blood, and his name is the Word of God. The armies of heaven were following him, riding on white horses and dressed in fine linen, white and clean.  Out of his mouth comes a sharp sword with which to strike down the nations. “He will rule them with an iron scepter.” He treads the winepress of the fury of the wrath of God Almighty.  On his robe and on his thigh he has this name written: KING OF KINGS AND LORD OF LORDS. And I saw an angel standing in the sun, who cried in a loud voice to all the birds flying in midair, “Come, gather together for the great supper of God, so that you may eat the flesh of kings, generals, and mighty men, of horses and their riders, and the flesh of all people, free and slave, small and great.” Then I saw the beast and the kings of the earth and their armies gathered together to make war against the rider on the horse and his army. But the beast was captured, and with him the false prophet who had performed the miraculous signs on his behalf. With these signs he had deluded those who had received the mark of the beast and worshiped his image. The two of them were thrown alive into the fiery lake of burning sulfur. (Rev 19:11-20)

Inri Cristo looks innocent and innocuous, but the truth is, he is a dangerous deceiver (a wolf) who will take his devoted followers to hell with him, as was the case for Jose Luis De Jesus and will probably be the same for Moses Hlongwane and Alan John Miller, unless they repent and acknowledge their LIES. Reader, take warning, other false christs will appear too. DO NOT BE DECEIVED by them. In contrast, the real Jesus, who is sitting at the right hand of the Father on the throne in heaven (without Mary by his side), is the only one who can save us from our sins and give us eternal life.