How well do you know the teachings of John MacArthur regarding the mark of the beast? Do you think John MacArthur is sound? Please be aware that there are many FALSE teachers, which have crept into the churches. 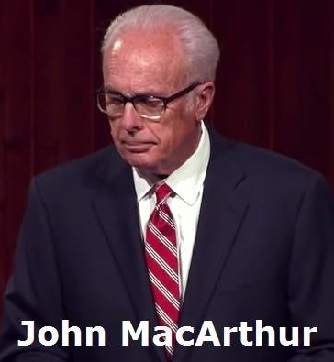 In our day the same ravenous wolves in sheep’s clothing are also on radio, TV, have their own study Bibles, etc. Those ear-ticklers come in various forms, from eternal security teachers to prosperity teachers to Papists, etc. All of that is plenty bad enough, but especially to teach one can take the mark of the beast and be redeemed is super dangerous for the last generation, which is fast approaching. Believe it or not, the well-known and popular Calvinist, John MacArthur, does that very thing!

John MacArthur Poison About The Mark Of The Beast

The question is, if you’re living in the tribulation period, and you take this mark — in other words, you identify with the beast’s empire — will you still be able to be redeemed? And I think the answer to that is, yes!

The Angelic Warning vs John MacArthur

A third angel followed them and said in a loud voice: “If anyone worships the beast and his image and receives his mark on the forehead or on the hand, he, too, will drink of the wine of God’s fury, which has been poured full strength into the cup of his wrath. He will be tormented with burning sulfur in the presence of the holy angels and of the Lamb. And the smoke of their torment rises for ever and ever. There is no rest day or night for those who worship the beast and his image, or for anyone who receives the mark of his name.” This calls for patient endurance on the part of the saints who obey God’s commandments and remain faithful to Jesus. (Rev 14:9-12)

That Bible warning is specifically geared for the saints  (or redeemed) to know, beyond any doubt, that taking the mark of the beast is NOT like sins which can be repented of such as sexual sins, drunkenness, theft, murder, etc. To receive the mark of the beast, which will be needed to buy or sell (Rev. 13:16,17) at that future point, will bring instant spiritual death to the saints who yield under the pressure then. The same act of disobedience will cause them to be tormented for ever and ever! That shows the EXTREME DANGER in what John MacArthur, and others, are teaching.

Related Scriptures on The Mark of the Beast

Those who enter God’s kingdom from that last generation are mentioned in the following two passages from Revelation:

And I saw what looked like a sea of glass mixed with fire and, standing beside the sea, those who had been victorious over the beast and his image and over the number of his name. They held harps given them by God  (Rev 15:2)

I saw thrones on which were seated those who had been given authority to judge. And I saw the souls of those who had been beheaded because of their testimony for Jesus and because of the word of God. They had not worshiped the beast or his image and had not received his mark on their foreheads or their hands. They came to life and reigned with Christ a thousand years. (The rest of the dead did not come to life until the thousand years were ended.) This is the first resurrection. Blessed and holy are those who have part in the first resurrection. The second death has no power over them, but they will be priests of God and of Christ and will reign with him for a thousand years. (Rev 20:4-6)

NOTE: Though it is crystal clear from Rev. 14:9-12, the aforementioned two Scriptures excludes any mention of even one person who received the mark and afterwards entered God’s kingdom after their death because they repented! To receive the mark of the beast is certainly to forfeit being victorious over the mark of the beast (Rev. 15:2)! Please remember that. That alone proves John MacArthur is dangerously wrong.

Furthermore, Rev. 20:4-6 shows the overcomers had not worshiped the beast or his image and had not received his mark on their foreheads or their hands. In other words, they NEVER received the mark of the beast, needed to buy or sell, and suffered the earthly consequences of their obedience and faithfulness to God when the antichrist is reigning. They endured and will reign with the Lord Jesus. (2 Tim 2:12). They didn’t worship the image of the beast and maintained their testimony of Jesus (Rev 6:9; 12:17), though they shed their blood to do so (Rev 17:6). Rev. 12:11 is most important and should be memorized:

Do NOT Believe John MacArthur!

If you follow the advice of John MacArthur or others who teach the same heretical way about taking the mark and getting forgiven afterwards (like Chris Pinto, Mike Desario and Jimmy DeYoung), you will surely be damned. DO NOT BE DECEIVED. There are many savage wolves in sheep’s clothing in our day and some might be your friend or favorite teacher! Again, this warning about wolves, includes John MacArthur, so do not be deceived about taking the mark of the beast and being forgiven afterwards!