John MacArthur and The Sin Unto Death

John MacArthur and his version of the sin unto death reveal the counterfeit saving faith he teaches while it also exposes his license to sin! Just like Dave Hunt, J. Vernon McGee and D. James Kennedy, Calvinist John MacArthur blatantly teaches one can sow to please the flesh (sinful nature) and reap eternal life! Imagine that! John MacArthur tries to debunk Scripture as he in vain teaches God can be mocked! The real truth is:

Gal. 6:8,9 is a salvation passage, not a rewards passage. We know that by the words eternal life in verse 8.

MacArthur Distorts The Sin Unto Death

What exactly did John MacArthur say about the sin unto death which boils down to an ungodly attempt to mock God? Referring to 1 John 5:16,17, John MacArthur taught:

And it refers to physical death, not spiritual death. 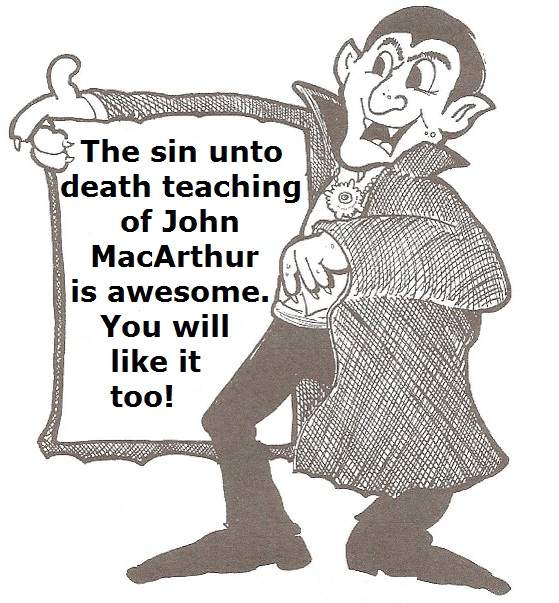 And what it says is that a believer can commit a sin which will cause the Lord to just take him to Heaven. He doesn’t go to Hell, he goes to Heaven. It’s the same thing in first Corinthians where some were desecrating the Lord’s table. Paul said, some of you sleep; some in the congregation have died because of that. It’s any sin that the Lord deems to be SERIOUS to the point where you’re better off removed from the Church because of your influence.

In Gal 6:7-9, Paul described the very teaching that John MacArthur, and all the other eternal security teachers who teach the same sin unto death fable, proclaim. It is an unsuccessful attempt to mock God! IF one could sow to please his sinful nature (flesh) and still reap eternal life and not destruction, that would be reaping what he does not sow!

HERETICAL John MacArthur also teaches you can be redeemed and take the mark of the beast and even perpetuates ADULTERY by saying one should stay in an adulterous marriage. Though John MacArthur is a fluent and popular speaker, he is a dangerous false teacher who is a snare to SOULS in the church!

This entry was posted in John MacArthur and The Sin Unto Death, Sin Unto Death and tagged Calvinism, Eternal Security, grace to you, john macarthur, license for sin, Once Saved Always Saved, sin unto death. Bookmark the permalink.