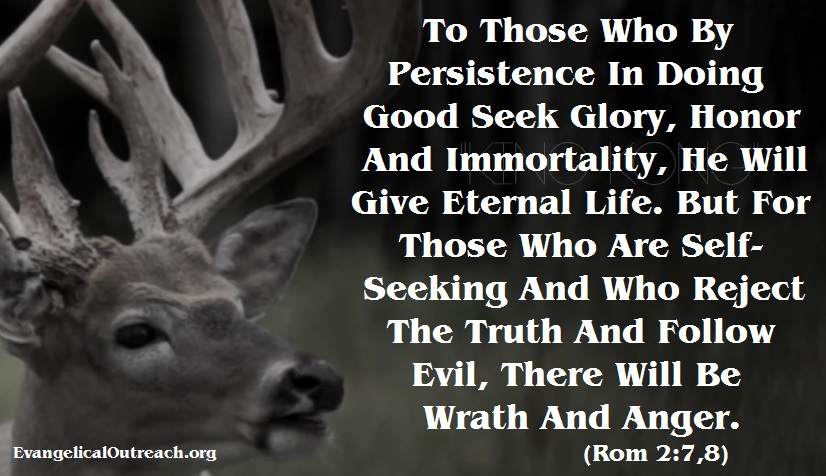 Have you ever noticed the vital connection there is between eternal life and the truth? It shows up at various times, but can be easily overlooked such as in the following passage:

To those who by persistence in doing good seek glory, honor and immortality, he will give eternal life. But for those who are self-seeking and who reject the truth and follow evil, there will be wrath and anger. (Rom 2:7,8)

Verse 7 describes the Christian, while the non-Christians are described as self-seeking and who reject the truth and follow evil. He rejects the truth! That means he rejects God’s word, which is truth (John 17:17) as well as Jesus, who is “the truth” (Jn. 14:6). There is no spiritual hope for such a person because he wants something, which is not in conformity to reality. Such a person has been deceived and walks in sin.

NOTE: Rom. 2:8 likewise states the rejecter of truth also follows evil! There is a definite dissimilarity between truth and evil. Such is also shown in Christian love:

Love does not delight in evil but rejoices with the truth. (1 Cor 13:6)

Evil and truth are spiritual opposites. That is also inferred with the devil, the evil one (Mt. 13:19 cf. Lk. 8:12) also being the father of lies (Jn. 8:44). That in turn implies why liars are placed alongside murderers in Rev. 21:8 and slanderers alongside homosexuals (1 Cor. 6:9,10). Liars (and slanderers) spread lies and falsehood, which breed evil and more untruths. Such people will not inherit God’s Kingdom. They will perish, but WHY? Here is the reason. Memorize this fact:

People perish, not because they are non elect as heretic John Calvin taught, but because they themselves made the choice to refuse to love the truth and so be saved! Similarly, Jesus taught that the ones who listen to him are on the side of truth (Jn. 18:37). The same also obey him (Heb. 5:9). Moreover, the righteous hate what is false (Prov 13:5). Again, it is apparent that as truth, obedience and salvation are vitally related, so are spiritual deception, sin and perishing. Since the word of God is truth it is also related to salvation (1 Pet. 1:23; 2 Tim. 3:15), while an absence of the truth of God’s word leads one down the easy road with the multitudes to eternal fire. Do you know Jesus NOW?

This entry was posted in Lovers of Truth, Truth and tagged Christian, follow evil, lovers of truth, salvation. Bookmark the permalink.