Many praiseworthy things can be stated about Paul the apostle, but his uncompromised and exemplary stand for God’s truth at Antioch is among the most noteworthy! 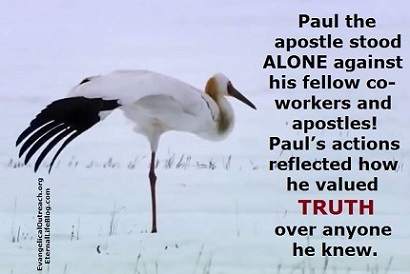 There is a quick mention of an historic event that Paul the apostle had with the apostle Peter, which is very important and stirring in our day of great religious compromise. Carefully note the following from Gal. 2:11-16:

When Peter came to Antioch, I opposed him to his face, because he was clearly in the wrong.  (Gal 2:11) Before certain men came from James, he used to eat with the Gentiles. But when they arrived, he began to draw back and separate himself from the Gentiles because he was afraid of those who belonged to the circumcision group. (Gal 2:12) The other Jews joined him in his hypocrisy, so that by their hypocrisy even Barnabas was led astray. (Gal 2:13) When I saw that they were not acting in line with the truth of the gospel, I said to Peter in front of them all, “You are a Jew, yet you live like a Gentile and not like a Jew. How is it, then, that you force Gentiles to follow Jewish customs? (Gal 2:14) We who are Jews by birth and not ‘Gentile sinners’ (Gal 2:15) know that a man is not justified by observing the law, but by faith in Jesus Christ. So we, too, have put our faith in Christ Jesus that we may be justified by faith in Christ and not by observing the law, because by observing the law no one will be justified.” (Gal 2:16)

Paul the Apostle Was An Exemplary Preacher

Paul the Apostle stood like a rock for God’s truth. That is totally unlike our day where it is so commonplace to disregard God’s truths for the sake of human friendship and speaking engagements! The multitude of preachers who do that exalt their friends over their own fidelity to God! They would rather maintain a friendship with someone they know in ministry and risk offending God, than the reverse! Paul the apostle was not like that. He was a true spiritual leader — a champion for truth and exemplary – one whom we should imitate in our day.

An event took place earlier in Paul the apostle’s life with Peter which is important. Unless one reads all of the Bible, he will miss precious truths like that connecting one. Paul the apostle stayed with Peter for fifteen days. That was at least fourteen years before the Gal. 2:11-16 event:

Then after three years, I went up to Jerusalem to get acquainted with Peter and stayed with him fifteen days. (Gal 1:18)

Cogent Proof That Peter Was NEVER a Pope

Paul and Peter knew each other pretty well! In fifteen days, one can get pretty chummy, especially if they both share the same residence. 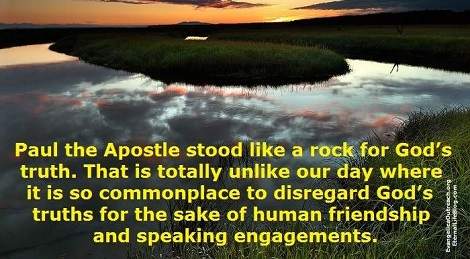 They also held the same high church office as apostle. (Apostle is the highest office in the church, 1 Cor. 12:28. There is no office as Pope.) We can assume Paul the apostle and Peter (the apostle) had plenty enough time to fellowship and discuss various points of doctrine, but that closeness never stood in the way of Paul’s faithfulness to God! Paul the apostle actually opposed Peter publicly over his actions involving a raging controversy of that day – the significance of the law to be justified. It was an indirect message, which Peter was projecting from his non-verbal behavior, which caused the problem. It involved him not eating with Gentile believers when the circumcision group was present! By his example, Peter even adversely influenced the apostle Barnabas to act the same way. Paul the apostle stood ALONE against his fellow co-workers and apostles! Paul’s actions reflected how he valued truth over anyone he knew. Such loyalty to God, and his truth, is almost unknown in our day of ecumenical compromise where the word of life has been thrown to the ground and stomped on!

Today’s Preachers Are Unlike Paul The Apostle

Unlike Paul the apostle, some of the most popular preachers of our day, with staggering influences, have flagrantly chosen to be an open friend of the world (Catholicism) over God’s eternal truths. Just the putrid examples of Billy Graham, Rick Warren and Kenneth Copeland alone are enough to distress anyone in our day who knows that Catholicism is antithetical to Christianity. Surely multitudes have been misled by them. Could Ulf Ekman, a former word-faith preacher who became a Roman Catholic, have been stumbled by Kenneth Copeland’s example? It certainly seems that way.

Those preachers and multitudes like them are not spiritually qualified to lead. They might have singing abilities, personal charisma and the like, but they terribly FAIL to have the needed qualifications cited in 1 Tim. 3, Titus 1 and 1 Pet. 5 for spiritual leadership, unlike Paul the apostle. If spiritual leaders won’t stand for truth, which may jeopardize a friendship, how can they stand for God’s truth which will divide their own natural family (Mt. 10:34-39)? I personally know two disgusting examples of people who communicated God’s word and maintained their pitiful friendship with men (adulterers), who broke up marriages to get their wives! This is disgraceful! Such people aren’t in the ball park with the Paul the apostle, who stood against Peter.

More Points About Paul The Apostle

Find Out Now If The Apostle Paul Was Genuine or Not

Those who portray Paul the apostle as the worst of sinners are not only smearing Paul’s holy character, they are also contorting the holy image of Christianity itself, but that type of attack is typical for the eternal security proponents. Paul the apostle was a mighty man of God, a courageous example and nothing less! Remember these truths about the real Paul the apostle.