Was Paul The Lord’s Apostle or A False Prophet

When you go street witnessing, at times you encounter some very strange and different people and beliefs. 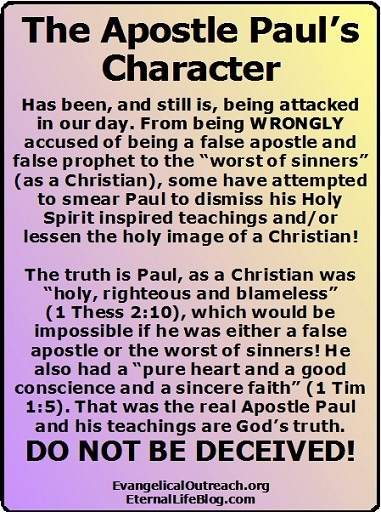 One example occurred years ago while we were street witnessing in Buffalo, NY. A young man there stated Paul was a false apostle and his epistles were not Scripture! I was stunned to hear that from a person who referred to the Bible as though it was final authority! It seemed he couldn’t reconcile his doctrinal beliefs to the various epistles Paul wrote and consequently thought the best way around his dilemma was simply to discard all of the Pauline epistles! So with one move, he resolved his problem (in his own mind) by stating that Paul was as a false apostle!

Sadly, that young man doesn’t seem to be alone in attacking Paul’s apostleship. Others have sprung up and have endeavored to do away with Paul’s teachings (and with it – knowingly or unknowingly – challenging the credibility of the Bible)! Furthermore, such people who say Paul was a false apostle don’t realize the mountain of evidence against their position — some of which I would like to submit to you here.

The Lord Jesus Told Ananias That Paul Was His Chosen Instrument

“Lord,” Ananias answered, “I have heard many reports about this man and all the harm he has done to your saints in Jerusalem. And he has come here with authority from the chief priests to arrest all who call on your name.” But the Lord said to Ananias, “Go! This man is my chosen instrument to carry my name before the Gentiles and their kings and before the people of Israel. I will show him how much he must suffer for my name.” Then Ananias went to the house and entered it. Placing his hands on Saul, he said, “Brother Saul, the Lord–Jesus, who appeared to you on the road as you were coming here–has sent me so that you may see again and be filled with the Holy Spirit.” Immediately, something like scales fell from Saul’s eyes, and he could see again. He got up and was baptized (Acts 9:13-18)

COMMENT: Paul was called Saul there and endorsed by the Lord Jesus himself. End of discussion. Paul was a true apostle.

Peter Believed Paul Was A True Apostle And That He Wrote Scripture:

Bear in mind that our Lord’s patience means salvation, just as our dear brother Paul also wrote you with the wisdom that God gave him. He writes the same way in all his letters, speaking in them of these matters. His letters contain some things that are hard to understand, which ignorant and unstable people distort, as they do the other Scriptures, to their own destruction. (2 Pet 3:15,16)

So we all agreed to choose some men and send them to you with our dear friends Barnabas and Paul–  men who have risked their lives for the name of our Lord Jesus Christ. Therefore we are sending Judas and Silas to confirm by word of mouth what we are writing.  (Acts 15:25-27)

COMMENT: The time frame of that passage is just after the important Jerusalem council. Paul was super exalted by James who presided over the council, as you just read. [Peter was there, but didn’t preside over the church council, much to the dismay of Catholics who were wrongly taught he was the first pope.]

An Unnamed Prophet of God Believed Paul (Saul) Was A True Apostle:

While they were worshiping the Lord and fasting, the Holy Spirit said, “Set apart for me Barnabas and Saul for the work to which I have called them.” (Acts 13:2)

COMMENT: If Paul was a false apostle then why would God want him to labor with Barnabas, a good man, to spread lies. That is also irrational!

Paul Taught With Barnabas For A Whole Year:

Then Barnabas went to Tarsus to look for Saul, and when he found him, he brought him to Antioch. So for a whole year Barnabas and Saul met with the church and taught great numbers of people. The disciples were called Christians first at Antioch. (Acts 11:25,26)

COMMENT: Paul (Saul) taught at the Antioch church for one year. How could that happen if he was a false apostle?

Paul Had The Supernatural Abilities Of a True Apostle Too

The things that mark an apostle–signs, wonders and miracles –were done among you with great perseverance. (2 Cor 12:12)

COMMENT: Besides being Jesus’ special chosen instrument and writing scripture, Paul had the supernatural abilities that God’s apostles have because he was a true apostle.

All The Elders In Ephesus Believed Paul Was A True Apostle:

In Acts 20:17-38 we read of Paul’s solemn message to the spiritual leaders of Ephesus and their response to Paul’s statement that they wouldn’t see him again. Clearly, they believed he was a knowledgeable and dedicated man of God, whom they deeply loved.

Weigh The Evidence For Paul’s Apostleship:

It is an impossibility for the Lord Jesus and his various devoted servants to state the aforementioned things they did about Paul, as well as trust him as they did, unless he was indeed a true Apostle. Getting back to the young man who wanted to discard the Pauline epistles so that he could maintain a belief in his doctrines, his grave error should be apparent to all! That young man needed to forsake his doctrines, which conflicted with the Pauline epistles (scripture), rather than forsaking the Pauline epistles, but his pride was standing in the way to do that! What he was doing was a prime way of how not to study the Bible. Remember, unless your doctrines are in harmony with all the scriptures, you don’t have sound doctrine. Also, God gives grace to the humble. We must be humble to get salvation and keep it. God bless you.