Bob Coy started a Calvary Chapel congregation in Ft. Lauderdale, FL about 30 years ago. It grew into a mega church (with about 20,000 attending), but that surely didn’t mean the senior pastor himself was living holy and upright! 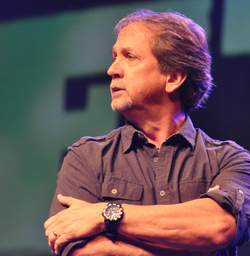 Church growth never proves that for any so-called “successful” minister! Lustful pornography adultery (Mt. 5:28,29) was a sin addiction for Bob Coy [photo by Joni B. Hannigan], but that was not all:

A new lead pastor for Calvary Chapel Fort Lauderdale was announced Wednesday to replace founding pastor Bob Coy following his resignation after admitting to moral failure last month. However, Outreach Pastor Chet Lowe was more specific about Coy’s demise, when he told the congregation during a worship service in April that the pastor had committed “adultery with more than one woman” and “sexual immorality, habitually, through pornography.” (http://www.christianpost.com/news/calvary-chapel-fort-lauderdale-names-new-pastor-to-replace-bob-coy-after-resigning-over-moral-failure-119381/)

Calvary Chapel is not a Biblically sound group, even though many people wrongly think it is. Why? Because eternal security is not a Christian teaching. The Bob Coy incident will surely hurt some real Christians. Being victorious over sexual addiction is assured, if one will only get dead serious about following the Biblical guidelines for such. Bob Coy didn’t have to yield to such wickedness; neither did Ted Haggard, Jimmy Swaggart or Jim Bakker! Jesus can set anyone free from his sin addictions, if he follows the Lord!

Sexual addictions of various types seem far too commonplace among exalted church leaders in our dark day. The righteous need to know that it is impossible to have eternal life and be addicted to sexual sin at the same time (Gal. 6:8,9; 1 Cor. 6:9,10; etc.)! “Pastor” Bob Coy was a child of the devil (1 John 3:10; 1 Cor. 6:9,10) as he preached sermons to his mega congregation! That fact, however, is flatly opposed by the demonic lie of eternal security, which allows for Christian adulterers, Christian drunks, etc. The George Sodini incident also allows for unrepentant Christian murderers! Some even think the BTK serial murderer was demon possessed yet Christian!

Also, there are NO special spiritual privileges for Bible teachers, except that our judgment will be more strict (James 3:1)! Finally, it is also interesting to note that there is no hint that Judas Iscariot, who went to hell after he committed suicide (Mk. 14:21), was not sound doctrinally. Therefore, just being doctrinally sound is NOT good enough. One must follow Jesus in the present tense to have eternal life presently. Do not be deceived or disheartened by Bob Coy’s adultery, and be assured there are no Christian adulterers. Perhaps, Bob Coy will become a Christian. May that be the case. [Below is a video of Boy Coy speaking about Tiger Woods’ adultery and not judging! It shows how spiritually lacking the Calvary Chapel “pastors” are!]