I Go To A KJV Only Church 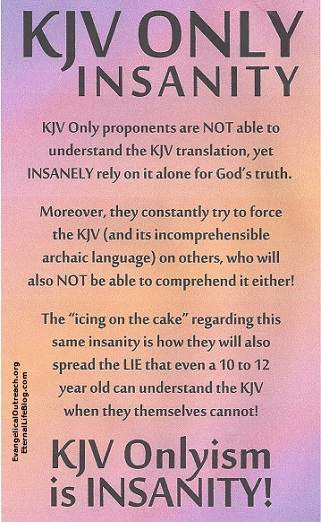 [Bible Answer and more Bible Answers] Thank you for your question about your King James only church. Please know it is the KJV only proponents, which we have encountered, who say Christians like us are lost, based on the sole fact that we are not using the KJV! Shocking and disturbing, but true! Such people have made a condition for salvation to be utilizing the KJV. That is unscriptural, dangerous, irrational and cultic! They can also be some of the most cruel, hateful, aggressive and ignorant people a Christian can encounter in our day. I speak from experience with their unjust attacks.

READ A REAL LETTER From A KJV Onlyite

Why are you attending a KJV only church? Do you realize KJV only people are, ludicrously, saying there was no word of God before 1611, because the KJV is the only word of God? Also, the KJV only people infer there is no word of God in Chinese, Spanish, French, Italian, etc.  Why? Because only the KJV (an English translation) is the word of God. I can’t comprehend such wild extremism being believed by any rational person, nor can I understand why anyone would read only the KJV, since it is not understandable. On those points alone, the KJV should NOT be used — that is, because it is incomprehensible. Why would anyone use a translation they can’t understand? Only because of misinformation or pressure from others.

This spiritual test is too important and eternity is a long time to take a chance like that. We MUST learn God’s word for ourselves by reading it and acting upon its message, but the KJV will severely hinder the former! Without question, it is to one’s disadvantage to read only the KJV. It is also a grieving lie to say that even a 10 or 12 year old can understand the KJV, when even the adults can’t! Liars are going to the lake of fire (Rev. 21:8), but that does not stop that type of KJV only propaganda being spread by KJV only teachers, who got rich off of exploiting others with such outrageous lies, as Gail Riplinger has.

The KJV is not the standard of accuracy. It is not infallible, nor perfect. The KJV is only a translation of the Bible, and NOT the Bible itself. It wasn’t even the first English translation of the Bible and was only “authorized” by a secular king to be used at that time! Moreover, the KJV had no copyright on it, because such never existed back then. That version is, therefore, often used in “study Bibles,” etc. so the author doesn’t have to pay out MONEY for quoting it! In other words, MONEY is the reason behind the prevalent use of the KJV, not its accuracy! NOTE: It is the original Hebrew and Greek manuscripts (the autographs) which were inspired by God, which are infallible and error-free — not any translation.

Furthermore, the KJV translators made translational errors, with some being very obvious and grievous. There are also many words in the KJV which seem understandable to us today (conversation, quick, meat, gay clothing, peculiar, etc.), but they meant something different when they were initially translated, since the English language has changed over the centuries. Those differences in word meanings “deceive” today’s KJV readers. So there are multiple comprehension problems with the KJV. Those are all facts, not fallacies, though not commonly heard!