Out Of Context Scriptures

To remove a verse of God’s word (the Bible) from its context, is to potentially distort it into something far different from its intended meaning. This is somewhat of a common practice, which seems to have people understanding that verse out of its context rather than how it should be understood in context! Furthermore, that faulty interpretation remains the truth to them, and when they read Scripture that false preconceived concept is how they understand that verse afterwards! That is one of the ways spiritual deception spreads — by misusing Scripture. The following are three examples of verses commonly cited and understood out of context.

The filthy rags Scripture misused is Isa. 64:6. It is an important one which has caused some people to think their own righteous acts are unimportant. In its context we read:

Since ancient times no one has heard, no ear has perceived, no eye has seen any God besides you, who acts on behalf of those who wait for him. You come to the help of those who gladly do right, who remember your ways. But when we continued to sin against them, you were angry. How then can we be saved? All of us have become like one who is unclean, and all our righteous acts are like filthy rags; we all shrivel up like a leaf, and like the wind our sins sweep us away. No one calls on your name or strives to lay hold of you; for you have hidden your face from us and made us waste away because of our sins. (Isa 64:4-7)

The context of Isa. 64:6 is about a backslidden and unrepentant people — those who continued in sin and angered God because of their actions! Such sinful people are contrasted with those who wait for God (v. 4), gladly do right and remember God’s ways (v. 5). The ones with so-called righteous acts which were like filthy rags were people doing religious things, while filled with sin. Such are detestable to God, even though they were doing the offerings, incense and appointed feasts (Isa. 1:13-16). Hence, their righteous acts were like filthy rags to God. On the other hand, God will REWARD righteous acts done with the right motive (Mt. 6:1-18), so all righteous acts are NOT like filthy rags in God’s eyes. To disregard the context of Isa. 64:6 is to distort the importance of obedience.

Your Redemption Draws Near

The pre-trib rapture proponents often cite Luke 21:28 and seem totally unaware that such is glaringly misapplied because it’s out of context! 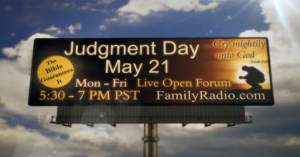 If we read from verse 25, the meaning is far from an any-moment pre-trib rapture, which has been cited for decades as being relevant for various events.  I heard John Hagee recently misapply the phrase, your redemption draws near to the four blood moons in 2014 and 2015. Here is the context of Luke 21:28:

There will be signs in the sun, moon and stars. On the earth, nations will be in anguish and perplexity at the roaring and tossing of the sea. Men will faint from terror, apprehensive of what is coming on the world, for the heavenly bodies will be shaken. At that time they will see the Son of Man coming in a cloud with power and great glory. When these things begin to take place, stand up and lift up your heads, because your redemption is drawing near.  (Luke 21:25-28)

Question: What are the these things referred to in v. 28? The in context bible answer is the significant change in the way we view the sun, moon and stars, which will cause multiple nations to be in fear and confusion at the roaring and tossing of the sea occurring. People will actually faint from terror over how the world has been adversely affected. It is only at that time, that the saints can lift up their heads, because their redemption is drawing near. That has NOT happened yet, even though our planet has been through two world wars and seen various devastating events. When that verse was quoted tens of thousands of times in the past, it was always misused and cited out of context!

Man Without The Spirit Of God Cannot Understand The KJB

The KJV Only crowd can be a shockingly divisive, condemning and irrational group! They place a spiritual noose around their necks when they misuse 1 Cor. 2:14 to teach that the saved (people with the Spirit) can understand the KJV (KJB), while lost people (non KJB people who mention the KJV is not understandable) can’t. How is this possible? First, let’s look at the context:

The man without the Spirit does not accept the things that come from the Spirit of God, for they are foolishness to him, and he cannot understand them, because they are spiritually discerned. The spiritual man makes judgments about all things, but he himself is not subject to any man’s judgment: (1 Cor 2:14,15)

To suggest for a moment that 1 Cor. 2:14 refers to the KJB is also to believe 1 Cor. 2:14 had NO meaning until 1611, when the first edition of the KJB was produced! That alone should shock KJV Onlyites to their senses, but it usually doesn’t! Secondly, IF their misapplication of 1 Cor. 2:14 is valid, then they must be unsaved (being without the Spirit) because they themselves cannot understand the KJB with it bizarre archaic Elizabethan English. NOTE: I have challenged numerous staunch KJV Only promoters to take the KJB comprehension test, but NONE would! WHY? Because they apparently know they do not understand the archaic wording of the KJB. That makes this whole KJV Only message insanity because the same are pushing a translation which they can NOT understand on others, who will not be able to understand it either! That is insanity and immediately invalidates their whole usage of 1 Cor. 2:14!

Since the KJB is only an English translation of the Bible and not the Holy Spirit inspired only word of God like they claim, then we can better understand how the KJV Onlyites have taken out of context 1 Cor. 2:14 to camouflage the comprehension blockage the KJV produces.

Again, it is very sad that the way a verse is misapplied and taught, as the aforementioned three examples have been and still are, is the way it tends to be remembered. Dear reader, please readjust your doctrine to interpret the above scriptures in their proper context for your own good. Any verse taken out of context can be very serious, since we must understand God’s truth.