Pope Francis and The Catholic Mary

On October 13, 2013 Pope Francis entrusted the world to the most powerful entity he knows. That personage is Catholicism’s Mary, who is sovereign, as various Catholic authorities have called her, including Pope John Paul II.

Pope Francis on Sunday entrusted the world to the Immaculate Heart of Mary and to her maternal care before the image of Our Lady of Fatima, asking Mary’s help to “revive and grow faith.” 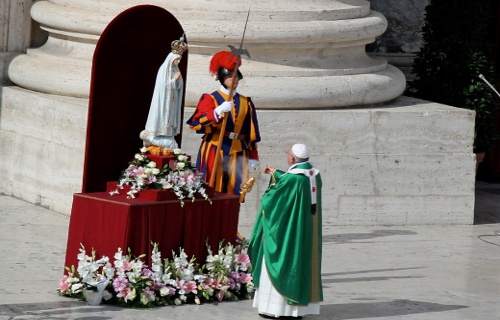 “Our Lady of Fatima, with renewed gratitude for your maternal presence, we join our voice to that of all the generations that have called you blessed,” Pope Francis said at the close of Mass in St. Peter’s Square Oct. 13. “We celebrate in you the great work of God, who never tires of bending down with mercy to mankind, afflicted by evil and wounded by sin, to heal and to save it.”

The original statue of Our Lady of Fatima was moved from its home shrine in Portugal to St. Peter’s Square especially for the entrustment. The act marked the culmination of a weekend of Marian prayer and devotion.  ( https://www.catholicnewsagency.com/news/pope-entrusts-world-to-immaculate-heart-of-mary/)

There are supposed to be over one billion Catholics worldwide. With a leader like the present day pontiff, and all his papal predecessors before him since Vatican Council II, it should be plain that the changes in Catholicism since Vatican Council II were only surface changes. Roman Catholicism remains just as spiritually dark and idolatrous as ever. For the sincere Catholic to ever learn the plan of salvation, he will have to get it from an outside source for himself. Preferably that will be the Bible itself, as it was with me — a former Roman Catholic who found salvation. The Pontiff is wrong.

This entry was posted in Pope Francis and The Catholic Mary and tagged Catholic, Catholicism, Fatima, Mary, pope francis, pope francis and mary, pray to mary. Bookmark the permalink.