Among the myriads of false teachings in our hour there exists one which is not often mentioned — the second chance doctrine. 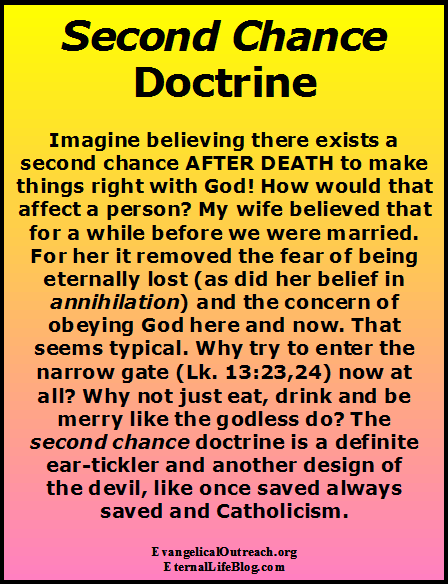 The second chance doctrine states that those who have not sinned too greatly (and were not clearly taught bible truth) will be given a second chance during the 1000 year reign of Christ to be faithful to God. If those same people who received a second chance fail again, they will then be annihilated. If they succeed the second time they will live on forever!

Who are the ear-ticklers who especially spread such a doctrinal myth? They are the Jehovah’s Witnesses and the group founded by Herbert W. Armstrong and reinforced by his son, Garner Ted Armstrong. Since their deaths, variations of their groups have been created. Among the offshoots in our day is the United Church of God, which believes similarly. [I’m not sure about the Seventh Day Adventists believing that teaching or not.]

Imagine believing there exists a second chance to make things right with God after death! How would that affect a person? My wife believed that for a while before we were married. For her it removed the fear of being eternally lost (as did her belief in annihilation) and the concern of obeying God here and now. That seems typical. Why try to enter the narrow gate (Lk. 13:23,24) now at all? Why not just eat, drink and be merry like the godless do? The second chance doctrine is a definite ear-tickler and another design of the devil, like once saved always saved and Catholicism.

Folks, clearly there was no second chance for the rich Jew who died and was in fiery torment after his death. All his cries for mercy were denied (Lk. 16:19-31)! Furthermore, this idea of a second chance for people after their death conflicts with John 3:18b:

… whoever does not believe stands condemned already because he has not believed in the name of God’s one and only Son. (John 3:18b)

That reflects the vital significance of spreading the gospel to all people for salvation’s sake this side of the grave. WHY go into all the world and preach to every creature if there is a second chance after death? [Don’t forget you can print FREE Bible-based materials to help Christians evangelize others.]

There definitely was NO second chance for the Sodomites who were destroyed in Sodom and Gomorrah! Clearly, their eternal fate is shown to be SUFFERING IN ETERNAL FIRE:

In a similar way, Sodom and Gomorrah and the surrounding towns gave themselves up to sexual immorality and perversion. They serve as an example of those who suffer the punishment of eternal fire. (Jude 1:7)

Without question, sexual sin and perversion will damn one’s soul. Other scriptures show the same. Anyone who downplays the lethal seriousness of such sin unto death through their teachings is a dangerous wolf in sheep’s clothing! That includes ALL eternal security teachers and even some teachers who reject eternal security! Sexual immorality, though prevalent and minimized, is a soul damning sin.

The Christian life is the only victorious life which factually offers eternal life here and beyond the grave. The true Christian life is one lived free from all sin addictions in service to God (Rom. 6:22). It is a life which brings great peace and joy for all who have surrendered their will to God to follow and obey the Lord Jesus Christ here and now. They alone have been washed and cleansed from their sins and made new creations in Christ because of the blood of Jesus Christ shed on the cross.

In summary, there is no second chance for salvation after death. Your spiritual condition, at the point of your death, determines your eternal destiny! It will take a PURE HEART to see God (Mt. 5:8) through faith in Jesus Christ (Acts 15:9) and you must sow to please the Spirit to reap eternal life (Gal. 6:8,9). Reject the second chance doctrine!