Jesus taught explicitly on the intense dangers of hell more than once. What he taught about, where the unrighteous go, is most stirring and frightening. The ultimate authority himself used the words eternal punishment:

“Then they will go away to eternal punishment, but the righteous to eternal life.” (Mat 25:46)

Jesus taught the unrighteous will go to eternal punishment. 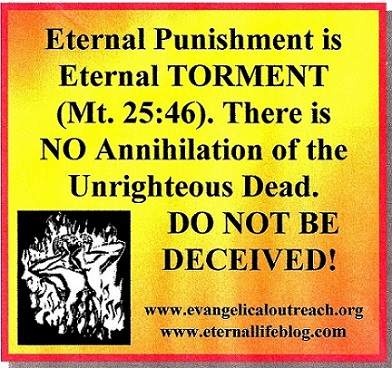 Hence, not everyone will go to Paradise, which makes Universalism and Gary Amirault, who teaches that, wrong.  What exactly is meant by the word punishment can be concealed and ambiguous, unless one looks into the Greek meaning of that word. It means TORMENT. That clarifies what Jesus declared — the unrighteous will go to ETERNAL TORMENT. Hence, according to the Lord Jesus, there is NO annihilation of the wicked dead as some teach, like heretic David Servant, for if the unrighteous dead are annihilated they could not suffer eternal torment (or punishment). According to the Lord Jesus, the “eternal punishment” of the unrighteous will be unending TORMENT! To be tormented one must be conscious, just as we read the unrighteous rich man in fire and agony was in Luke 16:19-31:

In hell [the Greek is actually Hades], where he was in torment, he looked up and saw Abraham far away, with Lazarus by his side. (Luke 16:23) 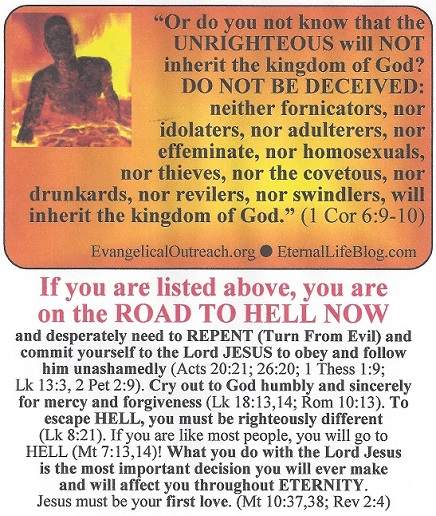 for I have five brothers. Let him warn them, so that they will not also come to this place of torment. (Luke 16:28)

So he called to him, “Father Abraham, have pity on me and send Lazarus to dip the tip of his finger in water and cool my tongue, because I am in agony in this fire.” But Abraham replied, “Son, remember that in your lifetime you received your good things, while Lazarus received bad things, but now he is comforted here and you are in agony.” (Luke 16:24,25)

The word agony in Luke 16:24,25 means TORMENT. That unrighteous man was in TORMENT IN FIRE. How long he had been there is not known, but he would stay in such a terrible condition! In fact, as you read this, he is still being tormented in eternal fire!

Their Punishment Would Last Forever

Those who hate the LORD would cringe before him, and their punishment would last forever.  (Psa 81:15)

Who does that include? Who hates the Lord? The answer is here:

The world [non-Christians] hates the Lord, even though they might not know it. They might be church goers and even profess salvation, but that doesn’t mean they are followers of Jesus and love him!

In a similar way, Sodom and Gomorrah and the surrounding towns gave themselves up to sexual immorality and perversion. They serve as an example of those who suffer the punishment of eternal fire. (Jude 1:7)

Just like in Mt. 25:46, Jude 7 also shows eternal fire does not annihilate! Eternal fire (Mt. 18:8; 25:41; Jude 7) causes endless suffering and torment. NOTE: thousands of years after Sodom and Gomorrah were destroyed by God (Gen. 19:24,25), those homosexuals were still suffering in eternal fire because of their sexual immorality and perversion. They were not, and will never be, annihilated. Eternal fire is the greatest danger that exists. Hell warnings are justified and some were directed at those who had already been saved, implying there is NO eternal security.