The Fearful Side of Heaven

Holy Writ teaches a two-sided God, that is, one with great mercy and kindness for 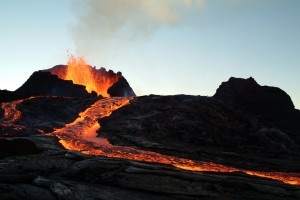 the humble repentant, while the same holy creator God will vent his intense wrath, anger and sternness on those who die in their sins:

For if God did not spare the natural branches, he will not spare you either. Consider therefore the kindness and sternness of God: sternness to those who fell, but kindness to you, provided that you continue in his kindness. Otherwise, you also will be cut off. (Rom 11:21,22)

God will give to each person according to what he has done. To those who by persistence in doing good seek glory, honor and immortality, he will give eternal life. But for those who are self-seeking and who reject the truth and follow evil, there will be wrath and anger. There will be trouble and distress for every human being who does evil: first for the Jew, then for the Gentile; but glory, honor and peace for 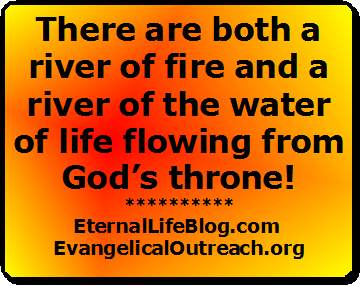 A conditional salvation is clearly taught with a present tense behavior revealing the child of God from the child of the devil (1 John 3:10). But that is also shown in another way which is most stirring — in a way which many church goers have never heard! There are both a river of fire and a river of the water of life flowing from God’s throne!

Only once is the following revealed in the entire Bible! It’s a side of God and heaven which is foreign to the majority!

As I looked, thrones were set in place, and the Ancient of Days took his seat. His clothing was as white as snow; the hair of his head was white like wool. His throne was flaming with fire, and its wheels were all ablaze. A river of fire was flowing, coming out from before him. Thousands upon thousands attended him; ten thousand times ten thousand stood before him. The court was seated, and the books were opened. Then I continued to watch because of the boastful words the horn was speaking. I kept looking until the beast was slain and its body destroyed and thrown into the blazing fire. (Dan 7:9-11)

Then the angel showed me the river of the water of life, as clear as crystal, flowing from the throne of God and of the Lamb down the middle of the great street of the city. On each side of the river stood the tree of life, bearing twelve crops of fruit, yielding its fruit every month. And the leaves of the tree are for the healing of the nations. (Rev 22:1,2)

From the same omnipotent throne will gush the river of the water of life. Its water is crystal clear and will nourish the tree of life. The overcomers will eat its fruit and leaves. Again, the creator God is shown to be the source of all things, including the kinds of rivers flowing from his holy throne!