The church at Thyatira had a very unique situation, with its resultant problems. 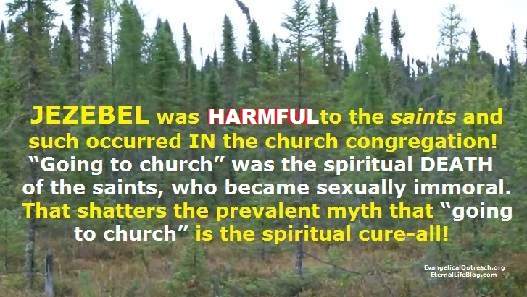 From it we can learn much including the truth that even the congregations in first-century Christianity had serious problems! After the Lord commended the angel (or messenger in Greek – v. 19) he then focused on their chief problem, a big one – a female false teacher!

Jesus said the so-called prophetess Jezebel was misleading his servants into sexual immorality and the eating of food sacrificed to idols! She was the reason they were in sin. The devil used that church woman, who must have been in either a teaching position or close to it, as a prophetess. Apparently, some believed her exalted false claim to their own spiritual harm. She was being “tolerated” and that toleration allowed that WICKED WOMAN to adversely influence precious saints. She was HARMFUL (like a spiritual viper) to the saints and such occurred IN the church congregation!

Nevertheless, I have this against you: 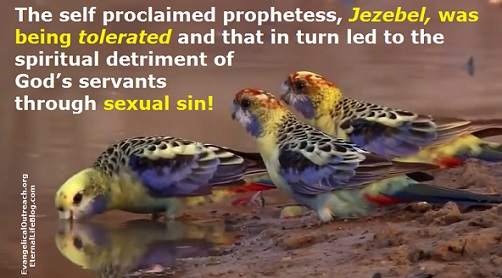 You tolerate that woman Jezebel, who calls herself a prophetess. By her teaching she misleads my servants into sexual immorality and the eating of food sacrificed to idols. I have given her time to repent of her immorality, but she is unwilling. So I will cast her on a bed of suffering, and I will make those who commit adultery with her suffer intensely, unless they repent of her ways. I will strike her children dead. Then all the churches will know that I am he who searches hearts and minds, and I will repay each of you according to your deeds. (Rev 2:20-23)

The context of Hebrews 10:25 refers to meeting together with “holy brothers” (Heb. 3:1) with qualified spiritual leadership in charge:

Remember your leaders, who spoke the word of God to you. Consider the outcome of their way of life and imitate their faith. (Heb 13:7)

Heb. 10:25 certainly does NOT allow for false prophets or false teachers to be in charge spuing out their POISONOUS teachings to the people attending, which is the norm in our day of eternal security! That is not the type of meetings any Christian should be attending.

Others in Thyatira had also picked up “her [Jezebel’s] ways.” Jesus saw it all! Sin was still the issue. NOTHING was hidden from his sight! Their future sins were not automatically forgiven. Jesus’ blood didn’t hide their sins from Jesus seeing it! Neither did grace! Do not believe the modern-day male and female Jezebels, who teach like that!

NOTE: Christians are to be patient with others, but not tolerant with false teachers. FALSE PROPHETS should never be tolerated! To tolerate their presence, especially in a church setting, is not pleasing to God, nor is it a sign of mercy or maturity! It is spiritual neglect and opens the door for EVIL to come in and DEADLY religious deception to occur.

Who Was This Jezebel

Who the Thyatira Jezebel was remains a mystery. Jesus called her that after the infamous WITCH and wife of King Ahab, who opposed Elijah the prophet. Some think this Jezebel might have been the Pastor’s wife! Regardless, she was an influential woman, who got in power and remained there (because she was tolerated) to the lethal spiritual harm of others. Just the name Jezebel speaks volumes of how the Lord Jesus saw that self-proclaimed prophet in a negative way!

To The Other Group NOT Listening To Jezebel

Jesus told the ones who rejected Jezebel to only hold on to what you have until I come:

Now I say to the rest of you in Thyatira, 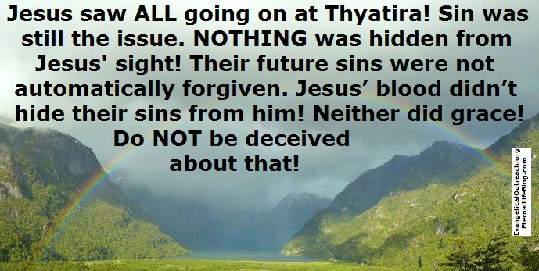 to you who do not hold to her teaching and have not learned Satan’s so-called deep secrets (I will not impose any other burden on you): Only hold on to what you have until I come. (Rev 2:24,25)

Jesus made it their responsibility to HOLD ON. To hold on is what the others didn’t do who listened to Jezebel and committed adultery with her!

Promise To ALL Overcomers

To him who overcomes and does my will to the end, I will give authority over the nations– “He will rule them with an iron scepter; he will dash them to pieces like pottery” — just as I have received authority from my Father. I will also give him the morning star. He who has an ear, let him hear what the Spirit says to the churches. (Rev 2:26-29)

[Catholicism wrongly gives their mythical sinless Mary the title, morning star, which is a title that belongs to the Lord Jesus (Rev. 22:16)! ]

Find Out More About The Overcomers and HOW To Be Spiritually Protected.

Various exciting mind-blowing promises, which we can’t fully understand now, are held out to the saints who endure to the end (Mt. 10:22), that is, who hold on to what they have (v. 25) and do God’s will to the end (v.26)! Among other things, the messages to the people at Thyatira show the vital importance of persevering and the POISON of false teachings. False teachings should be avoided more than poisoned and contaminated food! Others should also be WARNED. For more read, Warn The Righteous and Wicked.