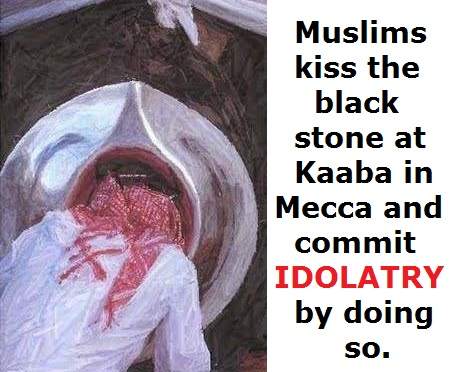 Little known to many in the West is the Muslim tradition of kissing the Black Stone of the Kaaba in Mecca. Muslims say it “fell from heaven” as a meteorite, but also say it was given to Adam after he was expelled from the Garden of Eden. Because the Black Stone is revered and adored with kisses by Muslims, they are venerating it. The Muslims venerate the Black Stone with kisses as Catholics venerate statues with kisses! Furthermore, Muslims think the Black Stone was once white, but turned black by absorbing the sins of the pilgrims, who kissed it (according to the below video)! While Muslims think they can kiss away their sins, the Hindus believe they bathe away their sins in a river and the Catholics confess their sins to a priest and pray to Mary for their forgiveness! True forgiveness of sins results in freedom from sin addictions and comes through a saving faith in the Lord Jesus Christ, who died for our sins on the cross and rose from the grave. [CLICK to read much more about true saving faith here.]

What a surprise it must be to some to learn that kissing an image or object religiously is NOT of God. It is actually a pagan practice, which is denounced by God:

Yet I reserve seven thousand in Israel–all whose knees have not bowed down to Baal and all whose mouths have not kissed him. (1 Kings 19:18)

God’s faithful ones don’t religiously kiss images or objects. God is to be worshiped in spirit and truth (John 4:23,24), which is antithetical to kissing any object religiously. Kissing anything religiously is pagan and idolatrous, yet embraced and openly done by Muslims (and Catholics)!

Moreover, Muslims think their sacred Black Stone “fell from heaven,” just like the Ephesians claimed about the image of Artemis:

The city clerk quieted the crowd and said: “Men of Ephesus, doesn’t all the world know that the city of Ephesus is the guardian of the temple of the great Artemis and of her image, which fell from heaven”? (Acts 19:35)

What was said to have fallen “from heaven” actually came from hell as a spiritual snare to their souls though unbeknownst to them, just like with the Muslims and their Black Stone of Kaaba. Remember, even the bronze serpent Moses obediently put on a pole later became a spiritual snare when the Israelites burned incense to it! It became known as Nehushtan. To worship God in spirit and truth as he desires (Jn. 4:23,24) is done without any object or image!

This entry was posted in Islam, Muslims Religiously Kiss The Black Stone of the Kaaba in Mecca and tagged black stone, black stone of kaaba, Islam, muslims, muslims kiss the black stone. Bookmark the permalink.